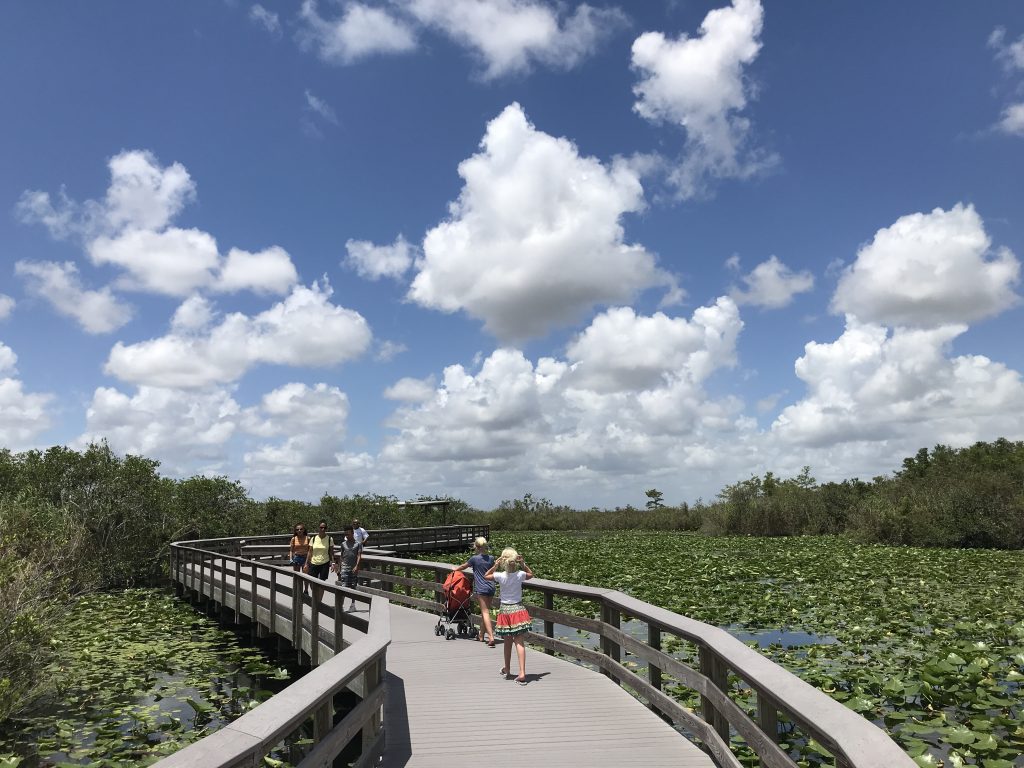 5 fun ways to do the Everglades with kids

We’ve had some glorious cold fronts this winter in Florida. But with spring break approaching— and summer-like temperatures surely not far off, either—it occurred to me that there’s no better time than right now to get down to the Everglades for a visit.

If you plan to be in Florida soon for spring break, this time of year is definitely the most appealing (read: comfortable) for visiting the place Marjory Stoneman Douglas poetically dubbed the River of Grass.

I get down to Everglades National Park at least once a year, usually for a work assignment or to show my favorite spots to friends who are visiting Florida and have it on their hit list (as most visitors to the state do).

Drawing in some one million annual visitors, Everglades National Park is one of the most popular national parks in the United States despite also being one of the country’s most vast and largely impenetrable wilderness areas. Pretty crazy, if you think about it.

There are many ways to visit the Everglades—some far more intrepid than others (thinking about the time I spent a week kayaking with college friends around the Ten Thousand Islands and camping on remote islands in the Gulf of Mexico, a story for another post).

But since “with child(s)” is how I tend to roll around Florida these days, I’ll start our coverage on the park’s highlights by sharing a few of my favorite spots to check out the Everglades as a family.

Go for a stroll along the Anhinga Trail

The National Park actually has three entrances (and four official visitors centers) spread across South Florida, including one south of Miami in Homestead, one just west of Miami and one just south of Naples on the Gulf Coast. And they’re all quite distant from eachother, so you’re not likely to be visiting all of the entrances over the course of a singe day (not enjoyably, anyway).

If you only have time to visit the park through one of its entrances, I always point people to the Homestead entrance and the Ernest F. Coe Visitor Center since it’s right near one of the park’s easiest and most wildlife-rich trails (don’t forget to stop at the legendary fruit stand Robert is Here on your way in for the best milkshakes and smoothies ever).

The Anhinga Trail is a roughly mile-long paved and boardwalked loop through a sawgrass marsh and other classic Everglades environments from which you can almost always spot alligators, turtles and wading birds. With kids, it also feels like a relatively safe option to me for immersing in the wilderness since you’re a couple feet above all those exotic denizens. But remember, this is Florida—and as a park ranger once told me, running zigzag won’t really do you any good against an alligator lurking by the shoreline in wait. Floridians known gators don’t really chase their  pretty anyway—they’re ambush predators. So just have fun and enjoy, and steer well clear of shorelines to stay safe.

Ride the tram to the viewpoint in Shark Valley

Show me a kid who’ll turn down a tram ride. I’ve used this bait to lure my kids out on a nature outing more than once. From the national park’s Shark Valley Visitor Center along the historic Tamiami Trail that cuts through the middle of the state, you can ride an open-air tram that brings you seven miles into the park to the Shark Valley Observation Tower.

There, a ramp leads to a sweeping viewpoint where you might spot more alligators, red-bellied turtles, cormorants and wading birds.  If you’re feeling more energetic and the weather isn’t too hot, you can also consider renting bicycles at the park kiosk to pedal along the flat and easy tram access road for the chance at spotting even more wildlife along the way (sunscreen and plenty of water obligatory).

Rent a houseboat to cruise out into Whitewater Bay

From the park’s Homestead entrance, you can cruise along the the Road to Flamingo 38 miles all the way to where it dead ends at the Flamingo marina, where you can rent a houseboat to captain your crew out onto the still water of Whitewater Bay (the largest inland body of water in Everglades National Park and a popular place to fish for redfish and snook).

I haven’t done this yet with my family, but it’s way high on my Florida bucket list—if only for the incredible star gazing at night from such a remote place!

The boats sleep a max of four adults and two children and cost $350 per night, which is cheaper than some Miami hotels but more expensive than camping (which you can also do at the Flamingo campground). You’re required to moor up in the marina to sleep, but you can be out cruising and exploring all day.

Cruise in an an airboat at the edge of the Everglades

For many families, hoping aboard an airboat tour to fly like a (very loud) hovercraft through the River of Grass is high on their Everglades wish list. And if you haven’t been on one, they’re a ton of fun—and also a surprisingly good way to see lots of wildlife, despite how noisy they are.

And while airboats aren’t actually allowed to operate within the national park itself, you’ll find lots of offerings for airboat rides in the Everglades (if outside the official park) on the roads leading to the Shark Valley and Gulf Coast Visitor Center entrances.

My favorite airboat ride is right near Fort Lauderdale and the the town of Plantation, where you can head out on 30-minute tours within Sawgrass Recreation Park into the marshes just outside the park’s official limits (honestly, down in South Florida, anywhere that isn’t paved over is pretty much the Everglades).

After the airboat ride, check out the park’s animal exhibits to see endemic Florida wildlife that goes beyond the usual alligator offerings with creatures like bobcats and even a Florida panther to be seen.

Scout for dolphins on Florida Bay during a pontoon boat tour

What many visitors don’t realize is that Everglades National Park encompasses more than just swamps, marshes and freshwater habitats. You can get a different feel for the park when you visit it through the Gulf Coast Visitor Center entrance in Everglades City, less than an hour’s drive southeast of Naples on Florida’s Gulf Coast.

When you head out on a 90-minute boat tour from here, winding your way through the mangrove maze of just a few of the Ten Thousand Islands into the open waters, it’s highly likely you’ll spot bottlenose dolphins and perhaps even manatees and stingrays in the clear and shallow saltwater environments.

Before you head back to civilization, make sure to stop for some classic Florida eats at Camilla Street Grill, a cool little open-air shack of a restaurant that fronts a mangrove-lined channel in the heart of tiny Everglades City. When stone crabs are in season (Oct. 1 to May 1) you’ll never go wrong with a platter of the sweet-fleshed crustaceans that were likely unloaded by local fisherman just hours before right at the restaurant’s docks.