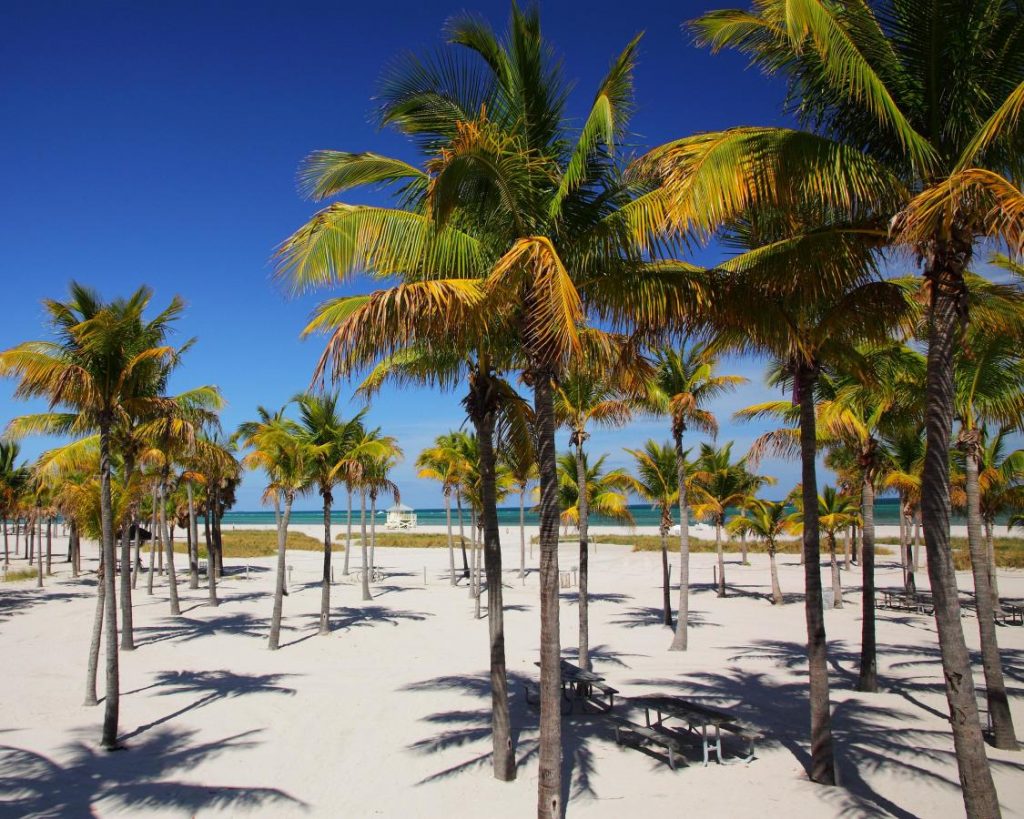 Where to find the clearest water in Florida

If you’re wondering where to find the clearest water in Florida, and which months to visit, we’ve got you covered! We break it down by sharing some of our favorite spots to find the clearest water in Florida. What’s more, these beaches bring something of their own as the calendar year unfolds. September’s pick is hunting for fossilized shark teeth on the Gulf coast in the clear waters at Venice Beach. Read on for inspo for the rest of the year!

Let’s start the year west of Tampa in St. Pete Beach, which was named the number-one beach in the U.S. by Tripadvisor for 2021. This popular destination has incredibly soft — and cool — white sand, some of the clearest water in Florida and enough room to move that you’re not right on top of those around you. Stake out your spot and spend the day — or more — soaking up the warm Florida sunshine. Did we mention January is one of the best months to visit Florida? Crowds thin after the holidays, and warm, clear days abound.

Honeymoon Island, north of Clearwater Beach, is our featured beach this month because it’s a terrific destination, whatever your relationship status. The island got its name from a Life Magazine contest for newlyweds in 1939, and couples won a two-week honeymoon stay on the island. Soak in the Florida sunshine, seek out seashells, walk along the island’s nature trails and snorkel in the warm waters, which are some of the clearest water in Florida. Honeymoon Island is pretty much an island paradise.

Between Boca Raton and West Palm Beach on Florida’s East Coast is Delray Beach, known as “Florida’s Village by the Sea.” Of course, this village comes with its very own beach with one right at the end of Atlantic Avenue, right in the middle of the action.

For spring breakers, March is one of the best months to visit Florida. But for a quieter scene even when the season is in full swing, travel a bit south to Atlantic Dunes Park where you’ll find the sandy shoreline past a tree canopy and at the end of a wooden walkway. When you’re ready to rejoin the action in Delray Beach, don your green and check out the city’s St. Patrick’s Day Parade & Festival.

In celebration of Arbor Day, the best Florida beac to visit in April is on Key Biscayne, just a few minutes drive from downtown Miami. Once a coconut plantation (read: loads of palm trees), that land was donated and is now Crandon Park on the northern end of the island. With two miles of sandy beaches there is plenty of space to spread out, and if the sun gets to be too much, take a stroll through the gardens. Or, of course, you can always take a dip in some of the clearest water in Florida.

Marco Island, just south of Naples on Florida’s southwest coast, is known for its four miles of beaches that are a sheller’s paradise with all sorts of naturally-made treasures waiting to be found. For a bit of seclusion, toss you towels down at Tigertail Beach and start exploring. Tigertail isn’t only popular with people, but birds, too, and is listed on the Great Florida Birding Trail Guide as one of the best places to peep our winged friends in all of Southwest Florida. End the day with a stunning sunset over the Gulf of Mexico.

This month is National Camping Month, so we’re highlighting one of the best Florida beaches you can camp on: Grayton Beach State Park on the Panhandle is considered “one of the nicest camping areas along the Gulf Coast.” And with some of the clearest water in Florida, it’s easy to see why. With 59 camping sites and 30 two-bedroom, one-bath duplex cabins, choose the accommodations that best suit you. Away from the beach, a 4.5-mile hiking and biking trail leads to the back waters of Western Lake, a 100-acre coastal dune lake popular for fishing (with a license) and paddling.

Summer is hot, which to our mind makes it one of the best months to visit Florida if you’re looking to cool off in our gorgeous waters. We’re staying on the Panhandle this month since the temperatures are cooler here than they are in the southern part of the state during the summer, but it’s still Florida and still warm! The 22-mile-long St. George Island is a barrier island that has some of the most natural beaches and clearest water in Florida, which makes sense — it’s no wonder this part of the state is called Florida’s Forgotten Coast. What a perfect place to lie back, relax and snorkel in some of the clearest water in Florida.

This month goes to the dogs, literally! August 26 is National Dog Day, and what better place to take your four-legged friend to Butler Beach just south of St. Augustine on Florida’s Historic Coast. All of the public Florida beaches in St. Johns County, where Butler Beach sits, are dog-friendly, so long as Fido is kept on-leash. The wide beach and refreshing water makes for a fun day at the beach for everyone.

One of our favorite things to do at the beach is hunt for fossilized sharks’ teeth, and one of the best places in the world to do just that is south of Sarasota in Venice Beach, known as the “Shark Tooth Capital of the World.” Keep your eyes peeled as you walk along the powder-soft white-sand beach and you may just spot a one of these natural gems, along with sea shells and maybe even sand dollars.

Is October a good month to go to Florida? We’re glad you asked. It’s the perfect time to crest the the 30-foot bluffs and catch sight of drift wood that dots the coastline at Boneyard Beach in Big Talbot Island State Park near Jacksonville. You won’t find your typical drift wood here, however, but rather toppled trees that have been stripped bare and weathered in the ocean before finding their final resting places on the sandy shoreline. Some think that the trees’ skeletons resemble an elephant graveyard.

The stretch of coastline that runs along Florida’s Treasure Coast in Martin County is filled with so many Florida beaches that there are plenty to fit whichever vibe you’re seeking. One we suggest is Bathtub Beach — can there be a more relaxing sounding place? The southernmost public beach on Hutchinson Island has reef and rock formations that create a “bathtub” that’s perfect for dipping your toes in the water and snorkeling.

Wondering if December is a good time to go Florida? Florida tourism by month can fluctuate, and this month is a busy one. Weather wise, it couldn’t be better. December temperatures in Florida are usually in the upper 70s and 80s. Expect crowds, especially as the holidays approach.

But why not head to the end of the state and kick off your celebrations in the Florida Keys? Though there aren’t many of the classic Florida beaches like those you’ve come to expect in the Sunshine State, there are a few to lay out your towels and set up your chairs to soak up the warm sunshine. One to check out is Calusa Beach in Bahia Honda State Park in the Lower Keys.

This small beach on the northwest side of the island has a terrific view of the historic Florida Keys Over-Sea Railroad trestle bridge, not to mention the Keys’ stunning turquoise waters, which are some of the clearest water in Florida.

These are just some ideas on the best months to visit Florida, beach by beach. So, which Florida beaches are on your list to discover this month?

Next: 7 sublime spots to watch nesting sea turtles in Florida