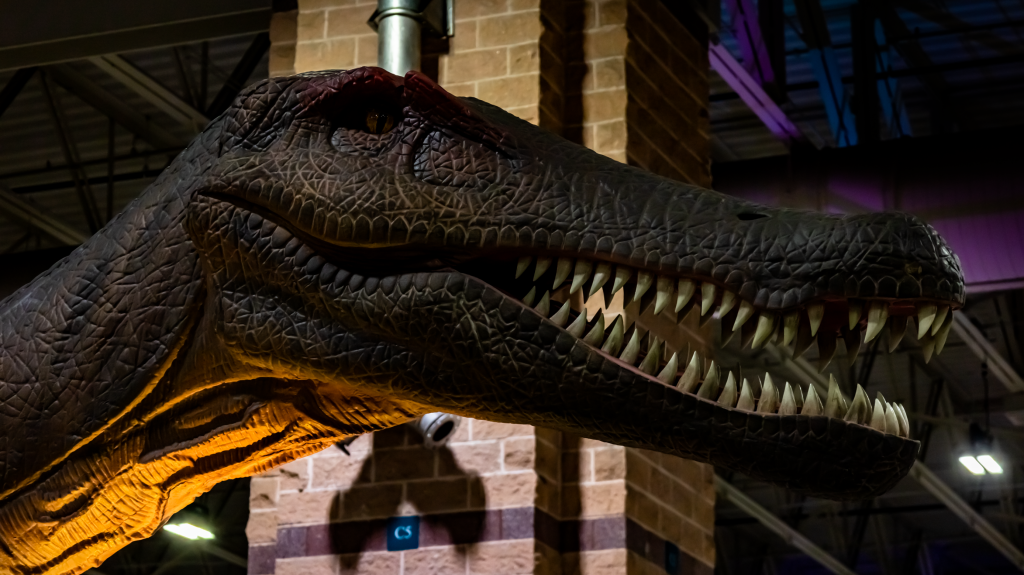 Dino and Dragon Stroll is coming to Tampa (March 12-13, 2022) and West Palm Beach (March 26-27, 2022) this month, but let’s be very clear about one Florida dino factoid–real dinosaurs never roamed the Sunshine State.

Wondering why dinosaurs were never in Florida despite all the fossils to be found here (looking at you Megalodon Teeth in Venice Beach)? There’s a simple answer you may not have considered–it’s because Florida was underwater during the Mesozoic era, when dinosaurs patrolled the planet.

Now that we’ve got that little bit of prehistoric history covered, rest assured there’s no shortage of ways to pretend that we did have dinosaurs in Florida, the land where anything is possible.

I’m thinking of the pure kitsch but totally fun attraction called Dinosaur World along Interstate-4, just east of Tampa, with its massive brontosaurus and T-Rex hanging out practically over the highway and causing my kids to shriek with joy every time we road trip to Orlando. And of course, in Orlando itself, there’s the Jurassic Park River Adventure at Universal’s Islands of Adventure, if you’re looking to get an even more realistic T-Rex fix.

And for two weekends in March during Dino and Dragon Stroll–an event that’s billing itself as the only North American tour that lets you walk through and get an up close view of life-like and life-sized dinosaurs (it’s a niche event, you see)–you can spot some seriously wild-looking scaled and winged things in a city convention center in Tampa and West Palm Beach. And while the attractions is swinging through several other U.S. cities–including Atlanta and Denver–these are the only Florida stops.

What is Dino and Dragon Stroll?

Basically, it’s a stroll-through attraction where you’ll get to walk past massive animatronic dinosaurs and dragons, some more anatomically accurate than others. With some dinosaurs and dragons standing over 28 feet tall and stretching 60 feet long, the encounters may take place inside a convention and expo center (the Tampa Convention Center and the Expo Center at the South Florida Fairgrounds), but they’re sure to come with more excitement than your standard, well, convention. The indoor settings are getting all dino’ed up to represent the Triassic, Jurassic, and Cretaceous periods–throwing it way back 251 million years ago, to when these behemoths roamed, to transport you all the more from the convention center surrounds to something entirely more prehistoric and exciting.

Among the cast of scaly and leathery-skinned characters you can expect to stroll past (besides your fellow Floridians, of course) are a Mamenchisaurus–a long and leery dino that had a neck nearly half its body length and towers over two stories high–and a fierce and fabulous T-Rex that’s 28 feet tall and more than 60 feet long.

I had a little run-in with a smaller dinosaur from the event’s entourage recently while filming a segment on Spring Break Travel in Florida (and beyond!) for Great Day Tampa Bay, and I can attest–if there’s a human inside these dinos (and we all know there is), then you’d be hard pressed to see any evidence of it, so realistic are the costumes and movements bringing the figures to life.

There are so many cool details that give these animatronic creatures a life-like look it’s actually pretty amazing–from curiously blinking eyes and toothy mouths that open and close to breathing movements from within their enormous rib cages, roars and other synchronized sounds that will make you feel like a real Pterodactyl could possibly swoop into the convention center at any moment for an imminent landing.

Can you touch the dinos at Dino and Dragon Stroll?

I’m just making up questions here that I think people might ask about this event, since this is something you’re supposed to do as a blogger to direct people to your website. But it’s a valid one, no? I’d sure want to know if my kids were going to be able reach out and run a grimy hand across a passing Apatosaurus or cuddle up to a Brachiosaurus if I was shelling out the $24.99 per person (only kids under 2 are free–everyone else pays full Paleontology price) it costs to attend the event for both the Tampa and West Palm Beach weekends.

The answer? Absolutely. Many of these animatronic costumes, replete with intricate feathers and shimmering scales, have delicate bits and bobs. But you’re still allowed to reach out and pet the dinos and dragons, with some made more approachable than others. I petted a Velociraptor at the news station the other day and its skin was buttery soft, even pliant. Kind of exactly how I’d expect a dino to feel, in fact. And I sort of wanted to take him home with me. There are also stationary dinosaur “rides” kids can climb atop for an up-closer encounter.

Something super cute to look for as you stroll around are the “caretakers”–real life humans with little animatronic bundles of joy in their hands who will be walking through the crowds to introduce newborn dinosaurs to anyone who wants to welcome them to our world.

What things can you do at the Dino and Dragon Stroll?

You mean besides roam among life-size Velociraptors and Stegosauruses? Isn’t that cool enough? Of course, there are other elements to this attraction, too, including educational signs where you can learn about dinosaurs and an interactive photo booth where you can snap some fun images, too. Kids can ride in T-Rex ATVS along a track around a T-Rex hangout and there will be bounce house inflatables, a dino-themed story time corner, a craft station and of course plenty of junk food vendors to try to keep the kids from seeing so they won’t beg for another sugary drink (water bottles are permitted inside, so be sure to bring yours). You can even climb inside a dinosaur egg and traipse inside the maw of a Giganotosaurus that stretches some 36 feet long and has its mouth positioned at ground level for easy access.

Do a good dino deed

Bring any canned goods and other non-perishable items you have to donate to Stomp Out Hunger, a charitable initiative that’s pairing with the Dino and Dragon Stroll to help aid children and families in Florida who are facing hunger and food insecurities.

Other things to know about Dino and Dragon Stroll