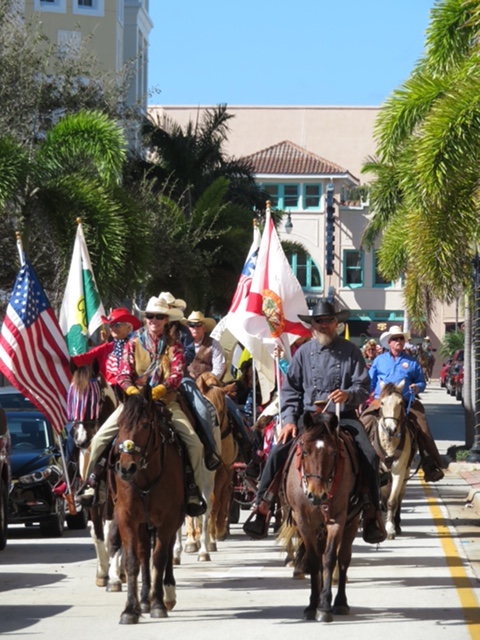 If you didn’t know what was happening in downtown Fort Pierce over the weekend, you were in for a big surprise. At around 10 a.m. Saturday morning, nearly 100 horses and their riders rode into town marking the end of their week-long ride, a celebration of Florida history on horseback.

The riders are part of the Florida Cracker Trail Association, a group of more than 180 people who share an interest and respect for Florida history. Every February (the last full week of the month), members of the association gather in Bradenton (near Sarasota) to begin their six-day ride across the state to Fort Pierce – the Annual Cross-State Ride. The ride “serves to highlight and preserve the importance of Florida’s role in the introduction of horses and cattle into the New World as well as the birth and continuance of the cattle and horse industries by Florida’s future settlers and their descendants.”

Florida’s livestock history goes back to the 1500s, when Spanish explorer Juan Ponce de León arrived in attempt to colonize the land. The Native Americans living in Florida had other plans, and after de León and his crew abandoned their plans, they left their livestock behind, including horses, hogs and Andalusian cattle.

According to the association, by the 1800s the Seminole nation had extensive herds (5,000 to 50,000 head) of cattle. Those numbers grew as Native American and white settlers moved south with their herds in search of new pastures.

After the Civil War, cowmen or cow hunters settled along Florida’s east coast and central corridor and “would hunt and round up cows over the wooded rangelands and miles and miles of open plains, in the hammocks, and by the rivers and streams, and had a unique way of herding cattle.” The cowmen would use bullwhips to flush the cattle out of scrublands; the 10- to 12-foot-long whips were made of braided level. When the cowmen snapped the whips, they would break the sound barrier with a very loud crack.

That sound earned the Florida cowmen the nickname of Crackers. The association says “The crack could be heard for miles, so they also used them to communicate with each other, like a form of Morse code, and were able to identify each other by their whip cracks.” Today, the term Florida Cracker refers to an independent, self-reliant cowboy and the accompanying lifestyle.

Horse and history enthusiasts from around Florida, around the U.S. and even around the world have participated in the ride. Past riders have come from as far afield as Germany, Italy, Canada and South America to mount up; this year’s riders who made the longest journey to get here came from Washington state.

The Annual Cross-State Ride follows the Florida Cracker Trail, the only dry route across the state. According to the Florida Cracker Trail Association, to the north of the trail, the Kissimmee River and its floodplains block the route; to the south, Lake Okeechobee and the Everglades impede passage. The route they follow was once cow paths, which “become roads, a road becomes a main route, and then it becomes a highway,” says Suzanne. “We do get to ride through some awesome ranch lands, but the majority of our ride is along highways and roadways.” The riders travel between 20 and 22 miles a day, and set up camp each night along the way.

“Our caterer has breakfast ready at 6 a.m. sharp,” says Suzanne. “We gear up the horses and drive our rigs (trucks and trailers) to the next camp.” After getting back to the horses, she says that the group is on the trail by 9 a.m. every morning en route to their next campsite.

Florida weather can change quickly, and just like the Crackers before them, today’s cross-state riders have to contend with Mother Nature, too. Suzanne says that the riders have encountered temperatures from the 20s to the mid-80s on the rides, and this year’s riders experienced 30mph wind gusts.

The Florida Cracker Trail has received national recognition for its role in Florida history. In November 2000, it was selected as a Community Millennium Trail in partnership with the White House Millennium Council, the Department of Transportation, Rails-to-Trails Conservancy, the National Endowment for the Arts and other public agencies and private organizations. The goal of Millennium Trails is to create a nationwide network of trails that protect the natural environment, interpret history and culture, and enhance alternative transportation, recreation and tourism.

“Our agriculture is so rich here in Florida, but it’s easily overlooked,” says Suzanne. “[The ride] brings back remembrance to why it’s [the Cracker trail] there, and what makes Florida, Florida.”