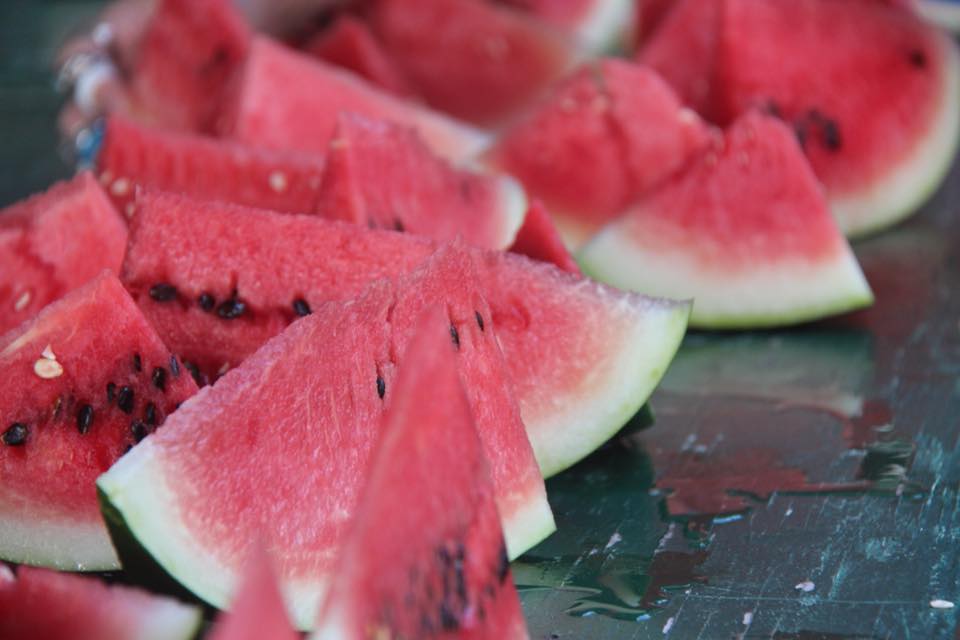 The founding of Pensacola in 1559 is celebrated during Fiesta Pensacola June 3 & 4. First, on June 3, the Mardi Gras-style Grand Fiesta Parade will roll through the streets of Pensacola. The following day, the parade moves to the water with the Fiesta Boat Parade.

It’s time to get funky in Orlando! Funk Fest returns June 3-4 at the Central Florida Fairgrounds in Orlando. The two-day event features old school music like R&B, hip-hop, soul, funk and even some comedy. Mary J. Blige, Jodeci and Master P are scheduled to perform in Florida in June weather.

Between Tallahassee and Jacksonville sits the town of Wellborn, which is where you’ll find the Wellborn Blueberry Festival on June 4. Join in for the pancake breakfast, and spend the rest of the day digging into everything blueberry: ice creams, pies, jellies, cobblers, syrups, fudge and even bushes — you name it, and you can likely find it in Wellborn.

Instead of blueberries, it’s watermelons in Chiefland (southwest of Gainesville) during the the 68th Annual Chiefland Watermelon Festival June 4. Join in a day filled with a 5k Melon Run, a parade, arts and crafts, food vendors and, of course, a seed spitting contest. What a wonderful way to keep cool in Florida in June weather!

Go Greek during Athens By Night on June 11 in Tarpon Springs, north of Tampa and Clearwater. Festivities include late-night shopping, dining, live music and dancing on the sponge docks. Opa!

You may not know where Ocklawaha is here in Florida (we didn’t either: it’s just southeast of Ocala), but you can be sure wakeboarders and wakesurfers do: they’ll be there for the Malibu Rider Experience June 11 & 12. In fact, these are the regional championships to see who will go onto the national finals. It’s sure to be a fun display, even for those of us not competing. And we can’t think of a better way to beat the heat of Florida in June weather.

During this month’s full moon you’ll have the chance to climb to the top of the Ponce de Leon Inlet Lighthouse in Ponce Inlet, near Daytona Beach. During the Climb To the Moon event on June 14, lighthouse keepers will share facts and stories about the lighthouse while you enjoy panoramic views and gaze at the moon hanging over the Atlantic Ocean.

You may miss Stock Island on your way into Key West, and that would be a shame. The small island’s home to a thriving artist community, and its I Love Stock Island Festival June 15-19 celebrates their island home. Go on an art stroll, enjoy a “dive-in” movie and get a real taste of the island on a food tour.

To be honest, we were surprised to learn that watermelons are grown in Florida. Not sure why, just never though of it! Even more surprising? The Annual Watermelon Festival has been held in Monticello (near Tallahassee) for 71 years this year and will be held June 17-18, with additional events held ahead of time, like the Bed Race on June 10. Over the weekend, though, is where watermelons shine with a 5k, parade, live entertainment, watermelon-themed games and more.

Live music is back, and one place to listen in in June is at the Captivaville Songwriters Weekend June 17-19 in, well, Captiva Island on Florida’s southwest coast. A whole host of musicians is set to perform over the three-day festival, so sit back, soak up the sun and listen to live music.

Just outside of Orlando, the Apopka Amphitheater hosts the Mid-Florida Juneteenth Music Festival June 18. R&B artists, DJs and Caribbean performances will entertain while you enjoy food trucks, arts and crafts, hands-on activities at this family-friendly event.

Over the course of three weekends in June (June 18 & 19, June 23-25, and June 30-July 2), classical music will fill the air during the St. Augustine Music Festival. The free events are open to everyone, and a special Juneteenth celebration the first weekend will feature pianist Terrence Wilson.

Practice some self-care at the Body Mind Spirit Celebration at the Florida State Fairgrounds in Tampa June 18-19. The two-day event features alternative, holistic health practices along with mediums, psychics and others who share their expertise for living a healthier, more grounded life.

Like mangos? Like the Keys? If so, you won’t want to miss the Mango Fest Key West — dubbed The Best Mango Fest In the World — June 23-26. Over the course of the weekend you’ll find all things mango, including trees for sale, arts & crafts, food and drink demos and more. Check out the Mango Brunch that Sunday if you’re still around.

There’s more watermelon fun and a terrific way to beat the heat of Florida in June weather between Tallahassee and Pensacola in Chipley, the site of the Panhandle Watermelon Festival June 24 & 25. Over the two days of the 66th annual celebration you can expect to enjoy live music, a pancake breakfast, car show, parade and a melon auction.

The charming town of Dunedin, just north of Clearwater Beach, sets the scene for the popular Downtown Dunedin Craft Festival, scheduled for June 25-26. Stroll along Main Street and browse the one-of-a-kind finds, perhaps even finding something perfect for you.

The last watermelon festival of the month is in Green Cove Springs (near Jacksonville), June 25 & 26. The family-friendly Clay County Watermelon Fest features watermelon games, live entertainment and a seed spitting contest. What could be more fun?

Do you like sharks? We do! And we think that the Jaws Of the Sea Beach Walk on June 30 in St. Augustine sounds like a blast! Join an expert for hour-long beach walk to learn about sharks’ biology, what types of sharks are living in the ocean waves, and about research into these fascinating creatures. Be sure to register in advance!

Where will your Florida travels take you in June? Be sure to share with us on social by tagging #FloridaBeyondJune!