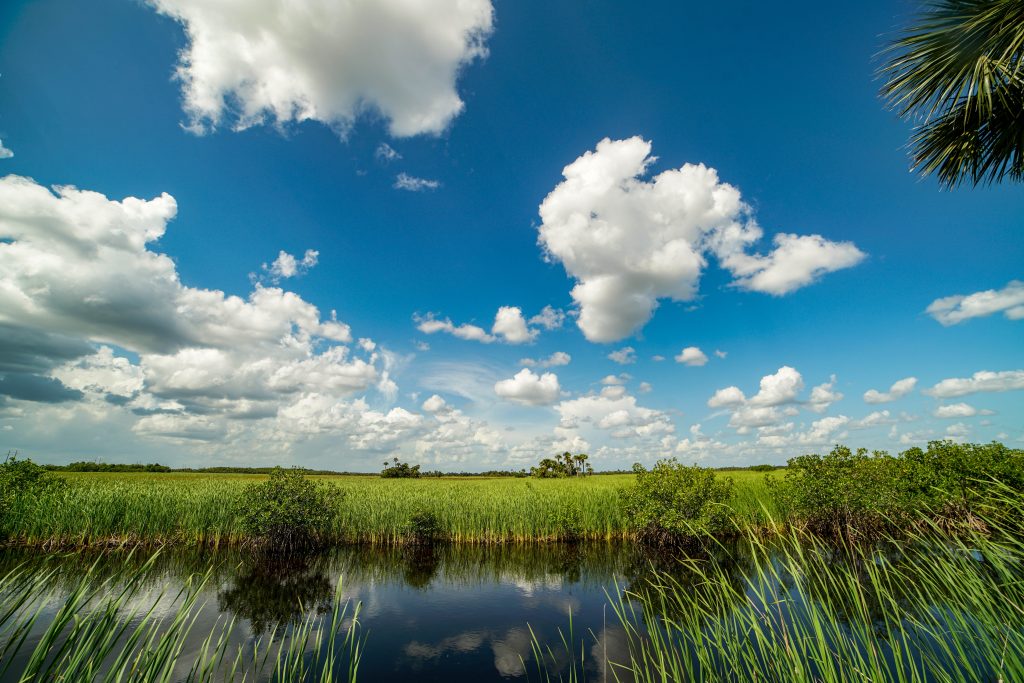 On Florida’s Southwest coast, Big Cypress National Preserve covers 729,000 acres of swampland, the fresh waters of which are essential to the health of the Everglades. Paddle the waterways, go on a biking or birding tour, tag along with a park ranger-guided outing, or take a scenic drive through the preserve to see more in a shorter amount of time. Adventurers can camp in the preserve, which is a designated International Dark Sky Site.

Keep an eye out, too – migrating birds travel through the preserve, as well as those who make their permanent homes here. You may also spot American alligators, river otters, bobcats, black bear and maybe even the endangered, elusive Florida panther.

Within eyesight of Miami’s skyline, Biscayne National Park is close to civilization, but seemingly a world away. 95% of this National Park is water, which means it’s a terrific destination for water sports enthusiasts, including snorkelers, SCUBA divers, boaters, fishermen and women, paddlers… pretty much anyone who enjoys being on the water.

There’s a lot of history in this part of Florida, too; 10,000 years, in fact, of human history, including pirates and shipwrecks, Native Americans and farmers. Climb out of the water and hike around the park’s islands to experience this side of the park. On land you may even spot a few of the 20 thereatend and endangered species found here, like Schaus’ swallowtail and Miami blue butterflies, American crocodile, wood stork and piping plover.

It’s hard to imagine that rockets launch just a few miles from Canaveral National Seashore on Florida’s central east coast, but don’t be surprised if you see something arching overhead during a visit. This stretch of coastline is made up of hammock and lagoon habitats that are perfect for paddling, walking the seashore’s paths, or simply soaking up the Florida sun on the beach.

Evidence of civilization from the Late Archaic era dates back 5,000, when the Timucuan and the Ais Native Americans lived here; remnants of shell refuse mounds and burial mounds can still be seen. Today, 15 species of federally-listed threatened and endangered animals make their homes in the park, including the Florida Scrub Jay, manatees and Arctic Peregrin Falcons. During nesting season, five species of sea turtles climb onto the shores to lay their eggs.

The oldest masonry fort in the continental U.S. is in St. Augustine: Castillo de San Marcos National Monument. More than 450 years of history is housed within the fort, which was built by the Spanish to defend Florida and the Atlantic trade route. Park rangers and volunteers in period dress are found throughout the fort to share the history and stories of the people who lived there, and in the region prior to the Spanish settlement.

Named for Hernando de Soto who, with his crew of soldiers, mercenaries, craftsmen and clergy, made landfall in Tampa Bay in 1539, De Soto National Memorial is a small park tucked along the bay; 80% of the park is mangrove swamp. Take a walk through the park and you’ll pass through pine flatlands and stands of hardwood trees en route to the shoreline.

The park is popular for fishing, as the area has been for centuries, and De Soto Rancho Fishing Clinic are available for kids 7 and up, and adults, to learn about the equipment and skills needed to cast a line to catch the big one. (A valid Florida fishing license is required.)

Even further south than Key West is Dry Tortugas National Park; nearly 70 miles further south, in fact. Accessible only by boat or seaplane, the park is very remote, which makes for a pristine National Park. Not only can visitors snorkel incredibly clear waters, but visit a 19th century fort, Fort Jefferson, nearly 30 years in the making, from 1846-1875, but never completed or used for its intended purpose: “to protect one of the most strategic deepwater anchorages in North America.” Over the years, the fort was used as a prison, including for Dr. Samuel Mudd, who set the broken leg of Abraham Lincoln assassin John Wilkes Booth.

Visitors to Dry Tortugas these days can tour the fort and then dive into the clear waters for snorkeling and swimming to glimpse sea turtles and other marine life living amongst the corals; paddle around the island in a kayak or atop a stand up paddle board; and even stay the night in a tent with nothing but the stars for miles.

Not only is it a National Park, but Everglades National Park is a World Heritage Site, International Biosphere Reserve, a Wetland of International Importance and a a specially protected area under the Cartagena Treaty, too. Now, that’s a lot of recognition!

Three entrances greet visitors to the 1.5 million acres of wetland that make up the park, and there’s plenty to do once inside. Take a walk or bike along the trails; paddle a canoe or kayak along the waterways; join a park ranger for an interpretive tour; or plan your own week-long paddling trip along the 99-mile Wilderness Waterway. Visitors can also tour the park by boat, keeping an eye out for alligators, manatees, white-tailed deer, gray fox and plenty more. Birders can make species off their Life Lists; more than 360 species of birds have been seen within the park.

Another National Park in St. Augustine is Fort Matanzas National Monument, the focal point of which is a coquina watchtower, completed in 1742. Not only does the park protect the watchtower, but about 300 acres of coastal environment containing dunes, marsh and maritime forest, and all that lives within.

Visit the park – only accessible by ferry – on your own and explore the Nature Trail, a shaded boardwalk that winds through a hammock on the oldest and highest parts of the island, or walk along the unpaved Marsh Trail through, well, the marshland. Get out on the water on a kayak, or just lay on the beach and soak up the Florida sunshine.

Fifty years ago, Congress established Gulf Islands National Seashore “in order to preserve for public use and enjoyment certain areas possessing outstanding natural, historic, and recreational values.” The largest National Seashore in the U.S. runs from Cat Island, Mississippi, 160 miles wast to the Okaloosa Area east of Fort Walton Beach. Because of its size, the seashore is divided into 12 areas that include historic forts, trails, campgrounds and, of course, beaches.

As you can imagine, plenty of activities can be found throughout Gulf Islands National Seashore: bicycling, beach going, hiking, snorkeling, SCUBA diving, bird watching, fishing and more. Camping is also available, which makes for some terrific star gazing in the dark night sky.

Six thousand years of human history are a part of the salt marshes, coastal dunes and hardwood hammocks of Timucuan Ecological & Historic Preserve in Northeast Florida. This area was stetted by the French in the 16th century, and well before then the Timucua, who occupied more than 19,000 square miles and had a population of about 200,000.

In addition to visiting historic sites, including the Fort Caroline National Memorial, which memorializes the short-lived French presence in Florida, there is plenty of outdoor activities to enjoy. Take a hike along the park’s trails that wind through shady hammocks and to impeccable beaches; paddle the waterways, and cast a line and go fish. Guided water tours are available, and visitors can camp overnight, too.