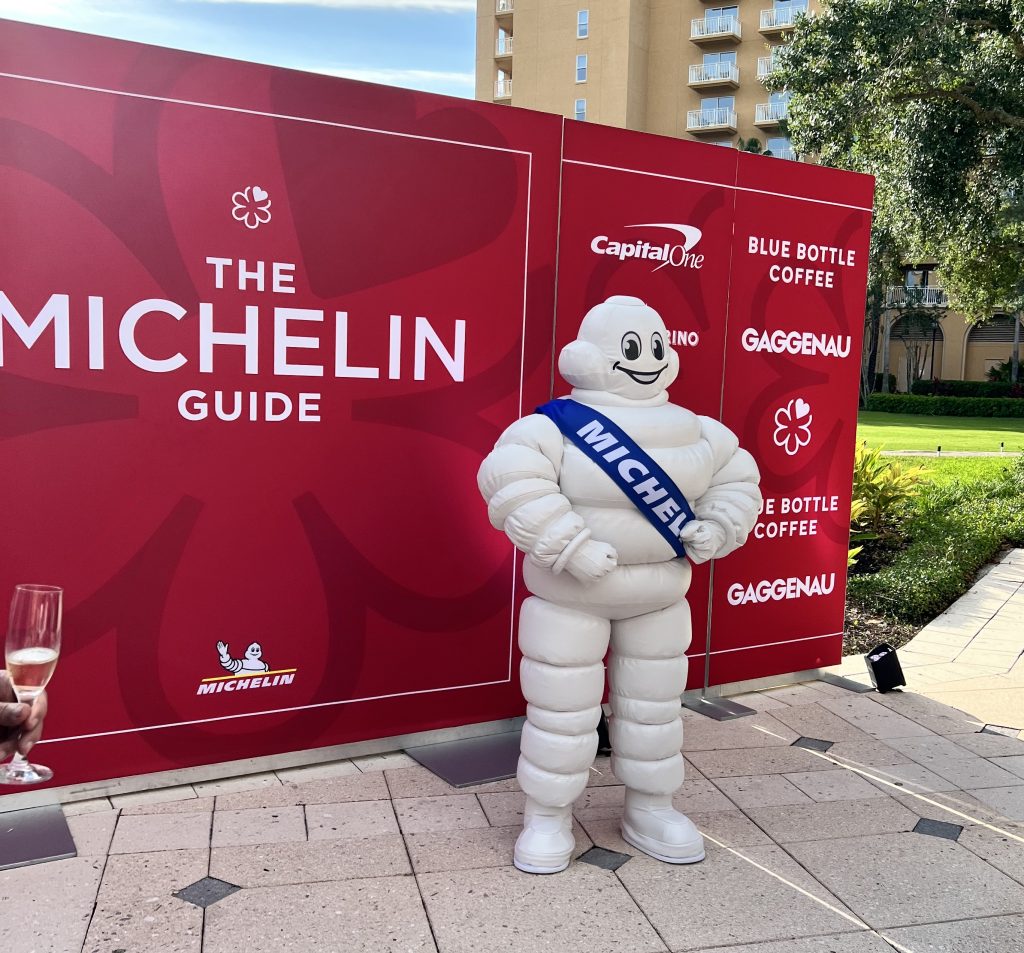 MICHELIN Guide Florida makes a splash with 15 star restaurants, and our insider favorites

This just in — the MICHELIN Guide Florida is here and includes 15 MICHELIN star restaurants. But you didn’t have to tell us you can eat very well in the Sunshine State.

From roadside taco spots and Cuban sandwich stands to some of the country’s best Vietnamese cuisine (in Orlando — and not near the theme parks, either!) as well as celebrity chef restaurants, Florida’s food scene is as diverse and delicious as they come.

So finally we can claim a few Michelin Guide Florida restaurants, too, as the French tire company-turned-fine food authority recently descended to reveal the 15 restaurants in Miami and Orlando that it’s giving a star or two of recognition to, with the MICHELIN Guide Miami, Orlando and Tampa officially revealed.

Before you cancel your trip to Tokyo or Paris, however, note that there aren’t any three MICHELIN star restaurants in Florida just yet — although Miami’s L’Atelier de Joël Robuchon came close, earning two stars in the MICHELIN Guide Florida.

And while not a single restaurant in Tampa managed to snag a coveted star, MICHELIN did name 29 restaurants between the three cities as recipients of its Bib Gourmand designation, another slice of MICHELIN acclaim that denotes great food at a great value. Overall, 118 restaurants in the three cities caught MICHELIN’s eye. Have a look at that list here.

Then, keep reading below for our 10 favorite spots in the three highlighted cities that, while nearly all aren’t seeing stars (although they’re all among the 118 restaurants included in the MICHELIN Guide Florida), are most definitely deserving of a visit for a Florida meal to remember.

Tucked away off of the busy streets of Miami’s Design District is Le Jardinier Miami, which was awarded one MICHELIN star last week. This delightful restaurant with comfortable indoor and outdoor space is easy to enjoy, and then there’s the food. Le Jardinier is “an approachable yet refined vegetable-driven restaurant” from Chef Alain Verzeroli, who earned a star for his New York City location under the same name. Not only is every dish I tried incredible, but beautifully plated so that it lives us to its Design District address.

Right along Park Avenue in Orlando’s toniest burg, Winter Park, Chef Brandon McGlamery’s temple to authentic wood-fired Italian fare is packed from early till late. And for good reason, too. The mustard spaghettini “cacio e pepe” is alone worth the trip to Prato, and that’s before you even get to the veal meatballs hearth-roasted in house and the killer cocktails.

Come for very cool rustic-farmhouse vibes, too, and one of Orlando’s liveliest scenes for solo dining at the bar. Guaranteed good food that doesn’t break the bank and a place you’ll want to come back to over and over gets a star in our book every time.

ROOSTER AND THE TILL, Tampa

Rooster and the Till, which received MICHELIN’s Bib Gourmand recognition, has long been a staple in Tampa’s Seminole Heights neighborhood, and for good reason. The menu here consists of tapas-style sharing plates and larger dishes to enjoy on your own, each created with seasonal ingredients in unexpected ways.

We tried the Scallop Crudo at the MICHELIN Guide Florida event in Orlando, and can’t wait to get back to the restaurant to dig into a larger portion. The gnocchi with short ribs is a constant on the menu and worth a try, too. Vegetarian options are always on the menu; we’ve got our eyes on the Not Pork Dumplings with ginger tofu.

Granted we’re no Michelin inspectors, but still, we were pretty shocked this superlative Orlando Japanese restaurant wasn’t named among the MICHELIN Guide Florida starred restaurants (although the city is starting to feel kind of saturated with similar omakase concepts, tbh).

Headed up by Henry Soso, James Beard-nominated Rising Star Chef of the Year (2020), the menu you’re coming for at Kabooki Sushi is an unforgettable 18-course omakase affair starring fish flown in on the regular from Tokyo’s famed Toyosu market, seasonal king salmon belly from Alaska, balsamic truffle soy made in house and other unforgettable umami bombs.

One of the tastings at the MICHELIN Guide Florida event was presented by Bombay Street Kitchen in Orlando, and the flavors were captivating. We tried the Kale Makhana Chaat with kale, roasted fox nut, date tamarind and pomegranate, and can’t wait to taste the rest of the menu when we’re in Orlando again.

The MICHELIN inspectors recognized Bombay Street Kitchen as a Bib Gourmand in the Florida Guide; one bite and you’ll easily see why!

We love the casual outdoor beer garden that opened at The Ravenous Pig (locals just call it the Pig) during the pandemic. And this Winter Park gastropub and brewery owned by Orlando culinary power couple Julie and James Petrakis never disappoints when it comes to buzzing atmosphere and consistently delicious food.

Perennial menu favorites include the hangar steak and cured-in-house charcuterie platter. The Pig’s goal was always to be a great American restaurant, and that’s mission most definitely accomplished.

Not only is the Columbia restaurant in Tampa’s Ybor City Florida’s oldest restaurant, but it’s now recommended by MICHELIN inspectors, too. Dine in and choose one of the restaurant’s memorable dining rooms, and if you’re planning to visit Tuesdays through Saturdays, make a 7 p.m. reservation and splurge an extra $8 for the flamenco show. Whenever you visit, though, you will dine on local favorites like the 1905 Salad, Cuban sandwiches, Cuban black bean soup, devil crab and so much more.

There are Cuban sandwiches, which can be found all over the state (not to mention the world). And then there’s Sanguich, the little Little Havana shop that’s grown into a big Miami deal thanks to its simple and simply fabulous menu offering a handful of Cuban sandwich variations and batidos (milkshakes, made from typical Cuban fruits like mamey and mango).

Everything is made in house here and there’s a walk-up window so you can grab and go. The married couple running this place are super proud of their Cuban American roots and traditions–and it shows in everything from the awesome food to the warm neighborhood welcome. And MICHELIN Guide Florida agrees.

One of the best meals I had in recent memory was at this organic Italian and Mediterranean restaurant inside the JW Marriott Orlando Grande Lakes, where course after course arrived at the table as simple in presentation as it was mind blowing in taste. So it’s a surprise to me, too, that this spot wasn’t named among the Michelin star restaurants in Florida.

Chef Eric Petrie, who worked with Melissa Kelly at Primo’s original Rockland, Maine, outpost, heads things up here and sources much of the Orlando menu from local farms and seafood and meat purveyors. The restaurant has an excellent selection of Sicilian and Tuscan wines by the glasses and does gourmet pizzas, too, if you’re not up for an entire feast.

A few years ago friends took us to grab breakfast at Se7ven Bites in Orlando’s Milk District and the bakery restaurant that’s recommended by MICHELIN has been on our minds every since! Breakfast biscuits are served anyway you’d like them, but we especially like the options topped with pimento cheese. We haven’t had lunch at Se7ven Bites yet, but that menu is pretty impressive, too.

What we didn’t miss is the selection of sweet goodies like coffee cake, brownies, oatmeal cream pies and more… One of each, please!

Did any of your favorite Miami, Orlando, or Tampa restaurants make the cut to be included in the MICHELIN Guide Florida? Let us know!

NEXT: 18 fun, new (+ newish) Florida hotels to check out and into