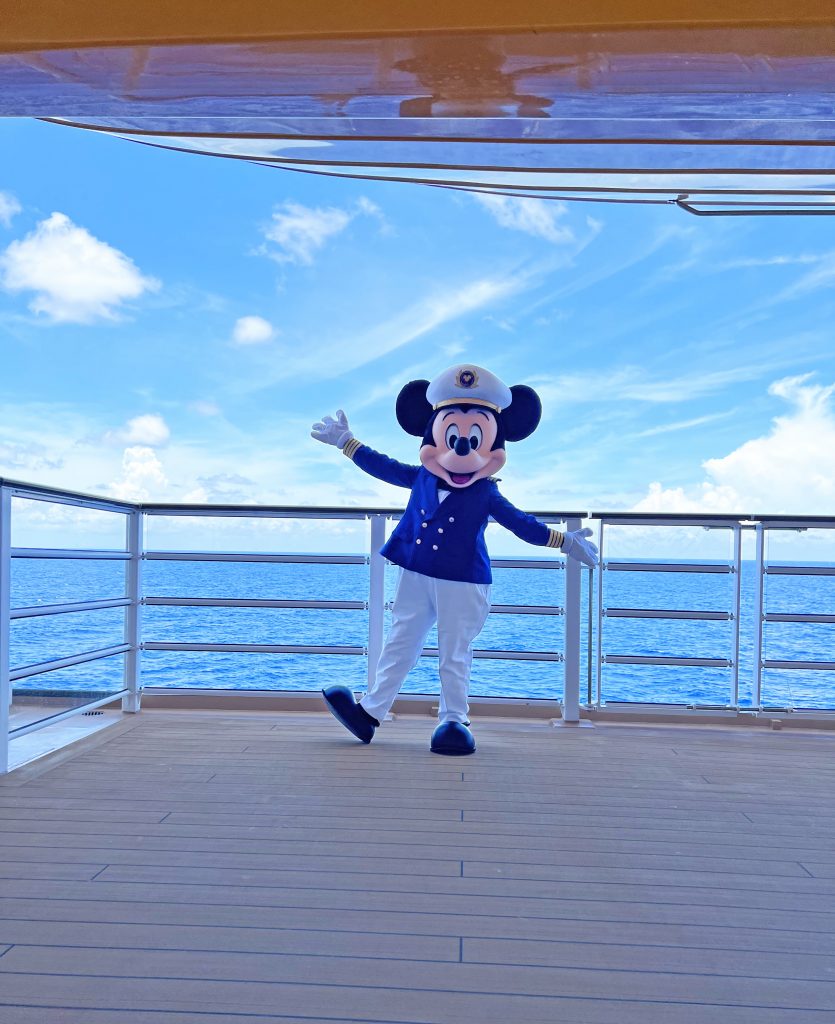 In April my godmother (Susan) called my mom and me to offer us the adventure of the summer: the opportunity to partake in the inaugural sail of the new Disney ship, Disney Wish, the newest ship in Disney’s cruise line. Would we care to join her on a journey that launched from Port Canaveral, Florida, cruised to Disney’s private Bahamian island, Castaway Cay, and spend our final full day sailing the breathtakingly blue Caribbean waters?

The only appropriate answer was an instant absolutely!

However, following the thrill of booking the trip, I, a then-18-year-old college student, immediately reverted back to preparing for finals, packing up my dorm after my first year, and then enjoying a week-long road trip with my friends in the Pacific Northwest. By the time I had arrived on the new Disney ship, I realized that I had given absolutely zero thought to what this voyage may entail.

And then suddenly, I was in a palace, more magical than the ones I admired in movies.

Once we boarded the new Disney ship we entered the Grand Hall, where our names were announced as both Cinderella and Prince Charming waved to us from an upstairs balcony. Across from them was an enchanting chandelier covered with glowing gold and purple stars, perfect for anyone to make a wish upon. As the chandelier beamed, it sent streams of sparkling light across the walls as the song, “So This is Love” from the original 1950 Cinderella classic filtered throughout the ship. Everyone was completely entranced by this divine spectacle.

Surrounding the Grand Hall are a series of high-end shops, selling the most luxurious items, ranging from De Beers diamond jewelry, to the latest Gucci handbags. One store that personally touched my heart was the Bibbidi Bobbidi Boutique, a salon that will provide your starry-eyed child with their own fairy godmother, transforming them into their most beloved princess— a moment that will surely touch both you and your child’s hearts.

A celebration for all on the new Disney ship

While one can assume that Disney’s main audience are those under 10, Disney Wish, the new Disney ship, has numerous attractions that can be enjoyed by adults, as well.

If you’re looking for a day of pampering, check out the Senses Spa, a relaxing treatment center that offers massages, facials and more. Need a drink? The ship has more than two dozen bars that produce the most incredible themed beverages. The Star Wars Hyperspace Lounge, which perfectly encapsulates the essence and nostalgia of the film series, sells one galaxy-altering cocktail, the Kaiburr Crystal, for $5,000 a pop. The drink, displayed within a smoke-filled case, also comes with a visit to Skywalker Ranch in California. The force is certainly strong with this one.

Now for the most important part… food on the new Disney ship!

Disney is known for serving the most exquisitely fun dishes, as well as providing top-tier dining experiences. For our final night aboard the Disney Wish we celebrated with dinner at the Frozen-themed restaurant Arendelle: A Frozen Dining Adventure.

From the walls containing the exact same paintings Anna sings “Do You Want to Build a Snowman” with, to Olaf greeting every table with his giggly voice and cute carrot nose, this eatery completely immersed us into the Frozen world.

To our surprise, the ship assigned us three servers that would remain with us each night during the cruise. We had the absolute fortune of dining with Melissa from Saint Lucia and her team. Melissa’s kind smile, joyful laugh and hilarious jokes made every night a joy. To whoever has the great luck of having dinner with Melissa, your Disney Wish adventure will be that much more special.

A bit of peace

It is easy to forget that you are at sea when sailing the smooth Caribbean waters. Throughout the trip, it would suddenly dawn on me that we were in the middle of the ocean. With that, I took a moment to step out onto the deck and just observe the waves.

The water, a beautiful cobalt blue, rippled as the ship crossed its path, releasing a calming sound that lulled me to rest as I sprawled out on the lounge chairs. Watching the water stretch across the horizon created a beautiful moment of serenity, something I believe we all need during these tumultuous times.

An experience like no other on the new Disney ship

Disney Wish provides an experience that is nothing short of spectacular. The sheer opulence found on the ship was different from anything I had ever seen. From the delicious food, to the infinite activities that can be enjoyed by people of all ages, to feeling like I was in the real-life Magic Kingdom, Disney Wish exceeds every expectation.

Share This :
Sydney Schock is pursuing her bachelor’s degree at the University of California, Davis. Double majoring in political science and history, with a minor in theater and dance, Sydney hopes to pursue a career in screenwriting, taking what she has learned about social and political policies and issues in order to accurately represent them through art.