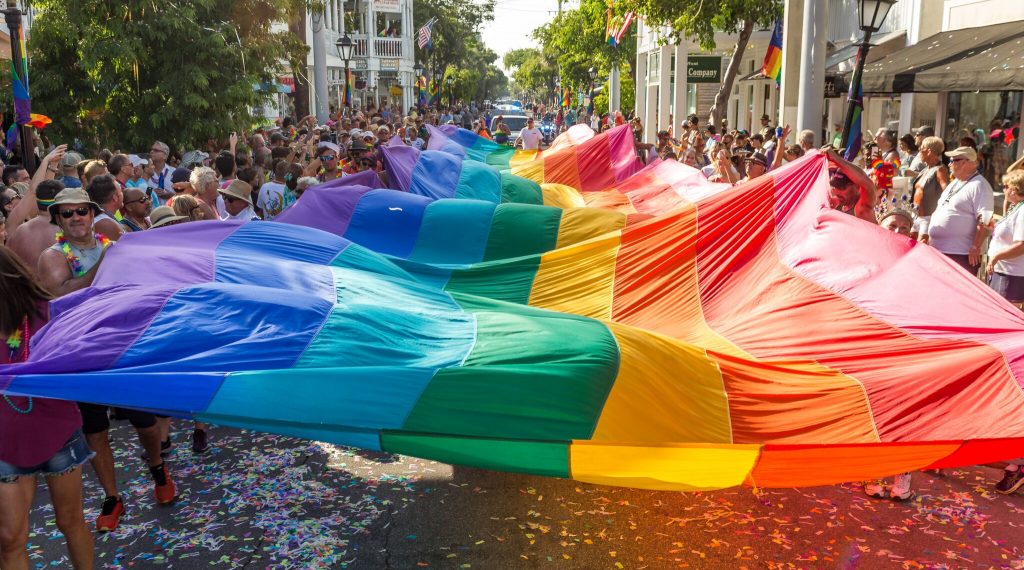 It’s June – Happy Pride Florida! Get ready to celebrate at these 8 great places and events happening across Florida in June.

Each year, Pride Florida is celebrated throughout this month to to honor the 1969 Stonewall Uprising in Manhattan. Events are taking place—and taking to the streets, too—all across the country and around the world this June “to recognize the impact that lesbian, gay, bisexual and transgender individuals have had on history locally, nationally, and internationally,” according to the Library of Congress.

With GayDayS back in Orlando and all manner of celebrations across the state, cities from Orlando to Key West are going all in on Pride Florida. Read on and mark your calendar for 8 places to celebrate Pride Florida in 2022. And get ready to rock your rainbow colors.

Key West is always a bastion of diversity, fun-loving people and guaranteed good tropical times. And five days of celebrations for all things Pride kick off June 1 when Key West Pride 2022 begins with a launch lunch at Marriott Beachside.

The party continues in the afternoon at Island House, regarded as one of the best gay-friendly resorts in the world, and is guaranteed to go late (and great) long into the night. Additional events held through June 5 across Key West include poolside drag shows, wine tasting, clothing-optional snorkel trips, sunset sails and parties, parties and more parties.

Get out on the water to fly the rainbow flag during FLoatarama, a one-day official Stonewall Pride event that plays out on the waters surrounding Fort Lauderdale on Saturday, June 11.

Come for an all out celebration in true Florida style, complete with skimpy beach wear and a flotilla of LGBTQ+-themed boats as well as a waterfront Sailor’s Dance and Pool Party in the afternoon starring San Francisco DJ Matt Consola at the Residence Inn Fort Lauderdale/Il Lugano.

The floating fete starts on Fort Lauderdale’s centerpiece waterway, the New River, at Stranahan House and proceeds up the Intracoastal Waterway, with views of multi-million dollar mansions and downtown Fort Lauderdale along the way. If you don’t have a boat or a friend with one, hop aboard a charter vessel to enjoy the fun out on the water or grab a spot along the river to cheer everyone on.

The Stonewall Pride Wilton Manors 2022 Parade, a celebration of inclusiveness and the largest Pride parade in South Florida (expect upwards of 35,000 people), is set for June 11 this year in Wilton Manors–a gay-friendly haven with a great neighborhood vibe just north of Fort Lauderdale. Before the twilight parade that takes to the streets at 7 pm, check out the Festival Marketplace and enjoy the Pride Street Party that starts earlier in the day and runs until late.

Bust out your best retro disco wear and channel the Bee Gees for Stonewall Ball 2022 in West Palm Beach, an outdoor dance party that takes places within an Electric Disco Forest at the Cox Science Center and Aquarium in West Palm Beach.

The party’s theme this year is “Too much panic, not enough electric disco.” And if that isn’t enough to encourage your attendance, it’s good to know that funds raised by the ball benefit programs at the Compass Community Center, which has served the LGBTQ+ community in Palm Beach County for over three decades.

On Florida’s gorgeous Gulf Coast in Sarasota, Project Pride SRQ has an entire month’s worth of events to celebrate the city’s LGBTQ+ people, businesses and organizations. There’s a ton you can get up to every week of the month to get in on the fun, including the Pride car parade (June 11), Taste of Pride a Pride Pet Parade (June 18) and many other events that range from night markets to dance parties.

The City of Sarasota joins in the celebration with Light Up the City, decorating street light poles and city storefronts in celebration of Pride month. Make a vacation if it, whatever you do, as the Saraosta area has some of Florida’s best beaches as well as some that are consistently ranked among the best in the world.

In its 20th year, St. Pete PrideFest is Florida’s largest Pride celebration and goes all month, starting on June 1 with the official raising of the Pride flag at 10 am at City Hall. From there on out, four themed weeks celebrate the LGBTQIA+ community, kicking off with the annual kick-off party at Sirata Beach Resort on June 1.

There are too many events to detail here, but the official website makes it easy to check the calendar to help decided where you want to be when–whether that’s the annual Stonewall Reception (June 17) at The James Museum, Family Day (June 18) along the St. Pete Waterfront or the St. Pete Pride Parade (June 25), the grandest and most colorful celebration of all.

The City Beautiful has long been considered a top LGBTQ+ inclusive community, and Pride celebrations will be happening all around Orlando throughout the month, including several are in remembrance of the tragedy at Pulse Nightclub six years ago.

Through June 12, One Orlando Alliance is encouraging everyone to give Acts of Love and Kindness in honor of the lives lost on June 12, 2016. The 6th Annual CommUNITY Rainbow Run (June 4) is a 4.9K that honors the 49 people killed in the Pulse nightclub tragedy, survivors and first responders, and benefits the National Pulse Memorial and Museum and onePULSE Foundation.

United We Dance (June 10) is a  night of music and dance to honor the 49 lives lost, Pulse survivors and first responders, and the resilience of the community.

GayDayS is back in 2022 after a pandemic hiatus and goes through June 6, with events at the theme parks and Avant Palms Resort & Conference Center as home base. And One Magical Weekend, one of the largest LGBTQ+ pride and music festivals in the world, is also back this year.

Come for great Florida seafood and camaraderie during the 4th annual Jacksonville Jumbo Shrimp Pride Night Event with River City Pride at the city’s ballpark. Jax holds its annual Pride parade in October to escape the summer heat. But there are some other fun events slated around the city this June, too, including the Cosmic & Queens drag queen brunch at the University of North Florida (June 12) and the chance to sip Rainbow flights at Legacy Ale Works on June 15 at Pints for Pride, where a portion of the proceeds will benefit the non-profit group CampOUT Florida.

The state capital kicks off its monthlong Pride celebrations with a Pride Month Proclamation Celebration with Mayor Dailey at City Hall early in the month. Then mark your calendar for the month’s main event, the Tallahassee PRIDEFEST Drag Pageant on June 11 at Dunlap Champions Club at Doak Campbell Stadium. Settle in (or take to the stage) for friendly competitions in the following categories: presentation, formal wear, gown, talent and Q&A.

The new winners will be crowned King and Queen–and everyone can celebrate another great Pride event in the books in Florida’s state capital.