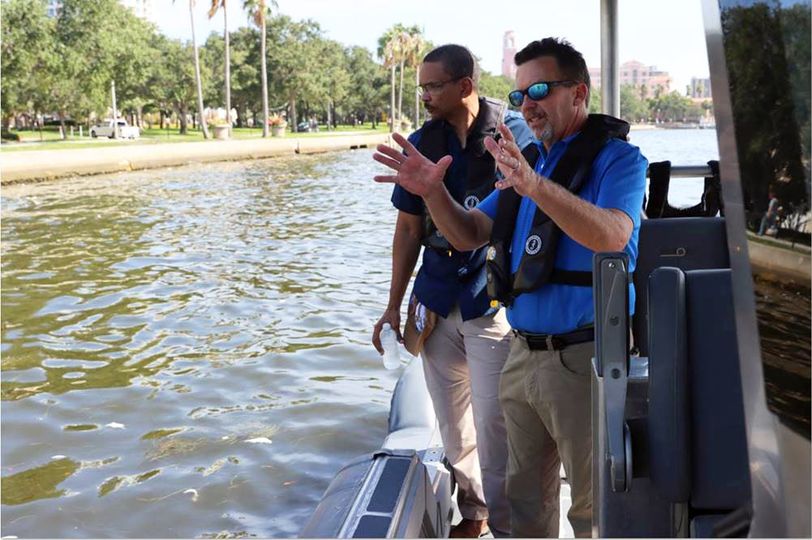 Normally we don’t talk about Florida beaches to avoid, but red tide changes that.

And if there’s anything that can really throw a wrench in a Florida beach day—and, far worse still, do incredible harm to our abundant wildlife and gorgeous coastline—it’s a red tide “bloom,” which is in fact more akin to a plague and happens when harmful concentrations of a specific type of algae occur at levels that are higher than normal.

A naturally occurring phytoplankton explosion of sorts, red tide can be exacerbated by manmade causes, too.

In the case of the state’s current red tide, fingers are pointing to Piney Point, a fertilizer plant near Tampa with a dam that began failing (read: overflowing) back in March of this year, dumping more than 200 million gallons of polluted water into Tampa Bay that is thought to be feeding the current catastrophe.

Red tides wreak havoc on Florida’s beaches—as is the case right now on the state’s Gulf Coast around the Tampa, St. Pete and Sarasota, where people are protesting the still-unfolding disaster that’s leaving beaches and canals laden with dead and dying marine life.

It’s worth noting that this is hardly the first time red tide has plagued Florida’s shores.

Spanish explorers even made reports of fish kills in the area back in the 1700s. And if you’re vacationing in Florida when there’s a red tide, it’s important to understand what’s going on in the Gulf of Mexico waters currently (the Atlantic side of Florida has so far been spared) and how it might impact you.

Between the stench of dead and rotting fish wafting on the air and a nagging urge to clear your throat and cough—the effect of an irritant produced by the red tide’s neurotoxin—it’s not a pleasant situation and definitely one to avoid if you’ve come to Florida to enjoy your best beach life.

What is red tide?

Red tide is caused by a naturally occurring but harmful phytoplankton or algae called karenia brevis that creates neurotoxins that can kill marine mammals and fish while also depleting the water’s oxygen supply, resulting in a mass kill off.

In short, this is nasty stuff.

The result of the current explosion of red tide right now in canals and beaches on Florida’s gulf coast in and around St. Pete and Tampa is dead fish—and not just of the tiny bait fish variety, either. There are reports of grouper, tarpon rays, even dolphins and other marine mammals that have reportedly been killed by this current disastrous red tide—in some places as thick as six feet deep at the water’s edge.

Even though crews are being deployed to clean up the carnage on a daily basis, pool nets and bulldozers are being outpaced by the piles of dead fish washing ashore right now (not that that’s keeping tourists from heading out on dolphin tours right now, believe it or not)

How do I know if red tide is affecting a Florida beach right now?

The best place to check the current red tide status in Florida is on the official website of the Florida Fish and Wildlife Conservation Commission, which is updated daily at 5PM and shows the last eight days of sampling in areas around the state.

What beaches should I avoid right now in Florida due to red tide?

If you have a vacation planned around the Tampa, St. Pete, Clearwater, Sarasota/Longboat Key and Bradenton areas anytime soon, it’s safe to say you’ll want to give serious thought to canceling any beach-going plans for the time being.

That doesn’t mean to say the beaches here are necessarily covered with dead fish, but red tide has shown up in samplings in these places and you have to expect to see its effects to some degree. Many hotels fronting a beach being washed with dead fish are being sympathetic to cancellations and rebookings (nobody wants that showing up on Instagram), but do call to check on your hotel or vacation rental’s cancellation policy.

That’s a tough one to answer, and really anybody’s guess. The Tampa Bay Times recently reported “no immediate relief on the horizon.” Currents and winds can move the red tide around or even force it into deeper waters—making it better, in some cases, but also potentially making it worse—but there’s no telling when and if that might occur, for now.

I had a weekend booked at a gulf-front property on Longboat Key for this month with my family, and the hotel manager advised me to postpone due to the red tide. She suggested considering rebooking for September or October, pending the situation improving, so that gives you an idea for what locals are thinking regarding the recovery situation.

Where are a few great Florida beaches with no red tide right now?

Of course there are many other things to do away from the coast in St. Pete, Tampa and Sarasota to keep you busy, if you still want to visit the area. And don’t forget about Florida’s spectacular springs, either, where you’ll never have to worry about a red tide threat, since it doesn’t occur in freshwater.

But what’s Florida without a few days at the beach?

Luckily, it’s less than a three-hour drive across the state to reach the east coast, where the FFWCC has reported no occurrence of the red tide-causing karenia brevia algae at all in the last week. Beaches are wide open and beautiful as ever there.

In fact, most of Floridas more than 1,300 miles of coastline are well in the clear when it comes to red ride. And that extends south of the Tampa Bay area and into the Panhandle and Northwest Florida, too.

Once you get south of Manasota and Englewood Beach on Florida’s gulf coast, current water samples are showing no occurrence of the toxins that indicate red tide. That means popular destinations like Sanibel and Captiva, Naples, Fort Myers and Marco Island are all in the clear.

North of Tampa, the coast is also clear from Anclote Key and the Tarpon Springs area north into the Big Bend and Panhandle. So it’s a good time to consider a vacation along scenic 30A and the beautiful beaches in Northwest Florida.

Florida’s entire east coast is also in the clear, so take your pick of great beach towns now, everywhere from Vero Beach and Fort Lauderdale north to the Space Coast and the Jacksonville Beaches.

Just do keep an eye on the FWC’s daily sample map for changing conditions, keep calm, and beach on.