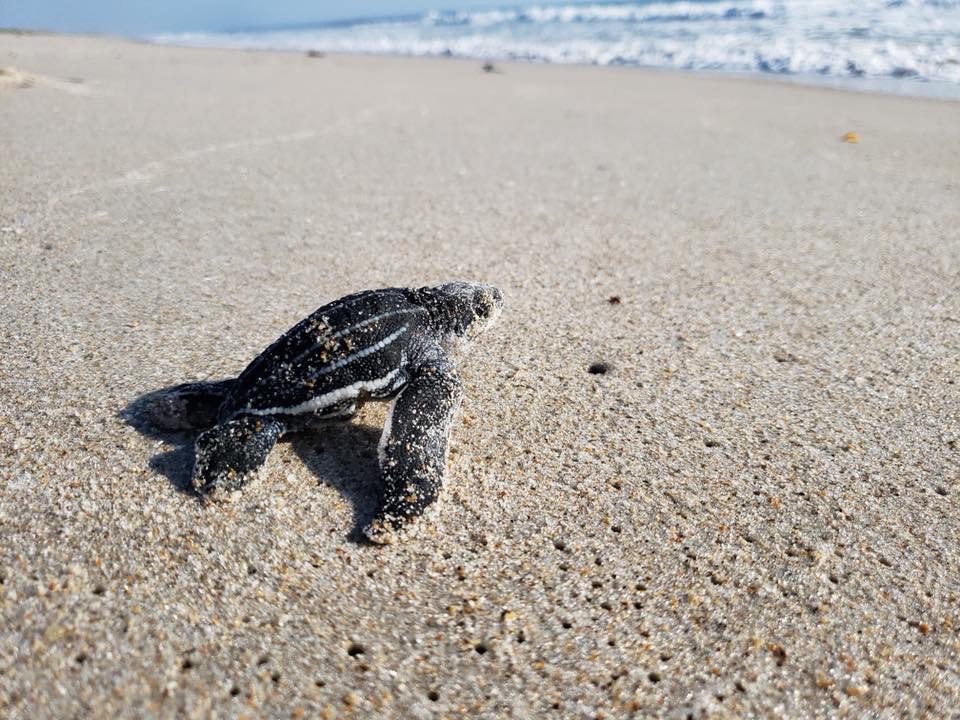 I remember the first time I saw nesting sea turtles in Florida and adorable hatchlings on a Florida beach. It was many summers ago in Cocoa Beach, where I’d come to watch a Space Shuttle launch (like I said, many summers ago—these days, regular rocket launches are the thing to see in the sky along the Space Coast, just east of Orlando).

I was strolling the sand early one morning getting some exercise before the day got too hot, when something up ahead of me scrambling down near the shore break caught my eye. At first, I thought it was a ghost crab—the translucent whitish crustaceans with big bulgy eyeballs that are entertaining to watch as they scramble out of reach of humans, birds and anyone else who might bother them.

But as I got closer, I realized what I was seeing were newly-hatched sea turtles hustling clumsily along on their tiny flippers, making their fearless ways toward the pounding surf.

I watched as more and more hatchlings followed, their little flippers leaving feathery marks in the sand behind them. Soon, a small crowd of humans gathered to look on as these perfect and tiny creatures thrust themselves valiantly into the ocean.

Knowing how few of them would make it to adulthood (one in 1,000, according to dire sea turtle hatchling statistics) and that among the females that did, they would return to this very beach to lay their own eggs—perhaps even 30 years later for this first time—just added to the wonder of the moment.

Not long after that, one moonlit night, I watched an enormous nesting sea turtle–a loggerhead mother–lug her body ashore in Melbourne Beach to dig out a nest for her eggs in the sand. Since then, I’ve been lucky to see the primordial ritual again and again here in Florida, which is home to the most important loggerhead nesting beaches in the world.

When is sea turtle nesting season in Florida?

Miraculous moments like this are happening right now along much of Florida’s coastline, where nesting sea turtles are a nightly occurrence. Every summer, mostly between the months of March to October on the east coast (and May through October on the Gulf Coast), over 100,000 mother sea turtles lumber ashore, usually under the cover of darkness, to lay their eggs.

Loggerheads are the most common type of sea turtles in Florida, but we also get our share of green turtles and leatherbacks nesting on our shores, too. And the east coast is by the far the best place to see them.

It’s common during sea turtle nesting season for beachside towns to dim street lights and require homes and condos along the beach to draw their curtains after dark to prevent artificial light from confusing hatchlings and nesting mother sea turtles (who are attracted to the reflection of moonlight on the ocean). If you’re taking a stroll on the beach after dark during sea turtle nesting season, try to avoid using a flashlight, too, and be sure to dress in dark clothing.

And while there’s a good chance you’ll spot nesting sea turtles at night during a walk along Florida’s close in places like Cocoa Beach, Melbourne Beach and Vero Beach, among others, going with a guided tour often offers a better shot at seeing this spectacle.

Where can I see hatching sea turtles in Florida?

To see hatchlings, like I have on several occasions, wake up with the sun and go for a walk along the beach, scanning the waterline  but also the sandy areas toward the dunes for signs of emerging life. Many beachside towns have a volunteer-led sea turtle patrol service that scans the beach in the mornings for signs of newly laid nests (which are roped off for protection) or hatching sea turtles. If you see birds, like seagulls, dive-bombing the sand, it’s sadly also a sign that hatching sea turtles might be near.

Where can I see nesting sea turtles in Florida?

Your chances might be better at spotting nesting sea turtles than hatchlings along Florida’s beaches thanks to several ranger and volunteer-led programs for the former that work with scouts on the beaches to get you up close to a nesting sea turtle mother.

A typical sea turtle nesting tour starts with a presentation by a ranger or guide about the animals, where they nest around the world and other information. During the presentation, there’s usually a scout down on the beach looking for nesting mothers. Once one is spotted, you’ll be advised how to proceed to the location on the beach for seeing the show. Be aware that you might have to walk up to a mile (or more) along the beach to get to the nesting area, depending on where you park and the available beach access.

Once the mother goes into egg-laying mode, a sort of trance, it’s safe for you to watch her from a distance—you can often get so close you can actually see the perfect ping-pong sized, rubbery soft eggs drop into the sandy nest.

Remember that it’s against the law to touch or disturb nesting sea turtles, hatchlings or their nests and that the animals are protected under the Federal Endangered Species Act and the Florida Marine Protection Act.

Read on for a few of the best spots up and down Florida’s Atlantic Coast to head out on a guided tour to see nesting sea turtles this summer–plus one really cool Vero Beach hotel offering a sea turtle walk program to guests.

Sea turtles nest between June and October along Melbourne Beach and in front of the Archie Carr National Wildlife Refuge, where somewhere between 8,000 and 20,000 nests are laid each year. Be sure to reserve well in advance for the Turtle Walk programs offered here in June and July, as they only take 20 people per night (yep, it’s the hottest ticket in town). After a presentation on the back deck that starts at 9 p.m. on weekday nights, you’ll be led down to the beach to hopefully see nesting mama loggerheads in action.

All ticket sales for guided turtle walks in June and July at the Loggerhead Marinelife Center in Juno Beach benefit the sea turtles and the center’s mission to protect them. The presentation before you head to the beach here is particularly interesting since you get to see the outdoor Sea Turtle Hospital and its adorable patients before heading to the beach in search of nesting mothers.

If you’re staying near Cocoa Beach, drive south a bit come nightfall to head out with the Sea Turtle Preservation Society on of their Turtle Night Walks along the beaches of Indialantic for an upclose look at nesting loggerheads. Walk are held several days in a week in June and July only, so be sure to book in advance.

Be prepared to walk one or two miles on the sand when you book a turtle walk with the Museum of Discovery and Science in Fort Lauderdale. The tour begins with special access to the museum after regular closing time for a presentation, then it’s down to the sand to scout for the main event.

Learn about sea turtles and the important role the National Park Service plays in protecting them during June sea turtle walks at Canaveral National Seashore, along Florida’s Space Coast. You’ll learn all about the sea turtle monitoring done along this stretch of pristine coastline–then join a ranger to walk on the beach to see nesting loggerheads. The program reports a 90 percent success rate for seeing nesting sea turtles, so cross your fingers and toes and get ready for one incredible show.

Guests who stay at the oceanfront Kimpton Vero Beach Hotel & Spa–our favorite property in the fun little town of Vero Beach–can join the hotel’s Turtle Talks during sea turtle nesting sesaon, held in partnership with the nonprofit group, Coastal Connections. Things kick off with a volunteer-led discussion about how to protect sea turtles, giving participants the chance to use special goggles to see how these creatures view the world. Then you’ll head down to the beach for a turtle walk and hopefully happen upon a nesting mother or two on the sand.

How can I help sea turtles?

Sea turtles have a big challenge ahead of them when they hatch and make their way to the water: survival! There are things we can do to help them along the way. Here, a few tips from EcoWatch we can implement in our everyday lives:

Up next: Winter in Florida means snorkeling with manatees