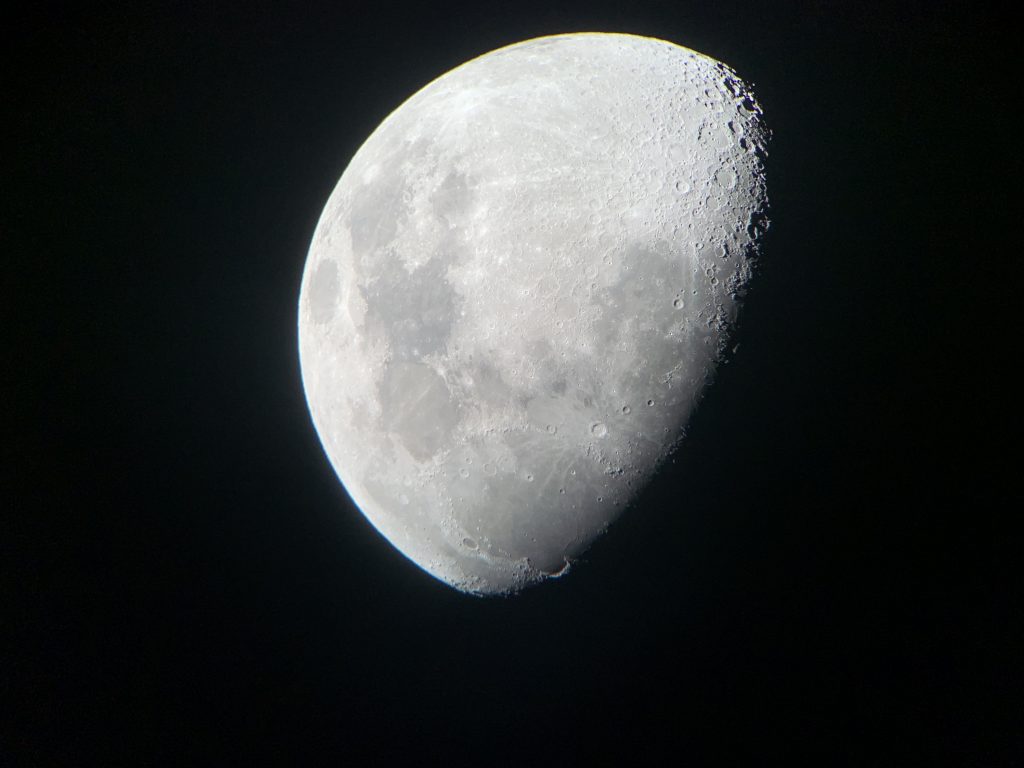 Seeing the moon and stars in Vero Beach

Stargazing has long been a favorite nighttime activity of mine, and it seems in the past few years or so, more people are enjoying looking up into the night sky to peep the moon and stars. We’re reading more stories about super moons, like the recent super flower blood moon last month, in our newsfeeds, and more open spaces are being designated as International Dark Sky Parks by the International Dark-Sky Association, which just designated its 100th dark sky park in April: Mesa Verde National Park.

When we were asked to participate in the first Stargazing on The Sea outing offered by the Kimpton Vero Beach Hotel & Spa on Florida’s central east coast, we leapt at the chance. What made the outing even more special is that it was our first hotel stay since the pandemic, and we were more than ready for a full-fledged getaway!

On a Friday evening, my husband and I made our way to the marina behind the Riverside Café on the Indian River Lagoon. I called ahead of time to check to see if our miniature Schnauzer Scout could join us, and she was more than welcome!

We met Chris from Paddles by Sea, our captain for the night, and then David, a local astronomer and president of the Treasure Coast Astronomical Society. It was just the five of us for that night’s outing, so we cast off. To start, Chris shared the history of the area with us, explaining that the Indian River Lagoon is part of the Atlantic Intracoastal Waterway that runs along Florida’s east coast, from Ponce Inlet north of New Smyrna Beach south to Jupiter Inlet, just south of Vero Beach.

Before he got too deep in the region’s history, however, Chris was interrupted – a small pod of dolphins surfaced right in front of the boat, and then we spotted a barred owl perched atop a tree, who-who-ing into the night; a terrific start to our outing!

Seeing the moon and stars rise

As the sun set to the west, a gentle breeze blew over the water and the moon and stars began making their appearances overhead. Gradually, we watched the moon rise and take its place in the night sky. The moon that night was 10 days old, meaning it was 10 days past the New Moon on its way to a Full Moon; in other, astronomical terms, it was in a Waxing Gibbous phase.

Fortunately for us, David is quite knowledgeable about all of the phases of the moon, along with the correct terminology, all of which he presented in a fun and understandable way for us novice moon gazers.

When the moon was high enough in the sky, David pulled out a pair of high-power binoculars and asked if we’d like to get a closer look. Honestly, I had no idea that we can see such clarity and definition of the moon’s surface through a small pair of binoculars, but there we were!

We spent about two hours out on the water, looking up at the sky and talking moon and stars. Our conversation turned from moon facts to a sort of pop quick from David – what songs could we think of about the moon. After coming up with a dozen or so, Chris steered us back to the marina and our stargazing tour came to an end.

When we arrived back on land, David set up his telescope so that we could take an even better look at the moon as it made its way through the night sky. And we thought the binoculars were powerful! The picture above was taken through the viewfinder with my iPhone… no editing needed!

A couple of passersby leaving the Riverside Café were curious about David’s telescope, and so  he asked if they’d like to have a look. After being awed by the moon, the young woman turned to her date and told him how much she loves science and the stars. That brief interaction proves just how much people are drawn to the unknown that’s always above us in the night sky.

How to go Stargazing on The Sea

The Kimpton Vero Beach Hotel & Spa is offering four upcoming dates for Stargazing on The Sea to watch the moon and stars: June 18 + 19, and July 16 + 17; stargazers must be guests of the hotel, and each outing is limited to six guests.

Due to overwhelming popularity, additional dates have been added! August 27 + 28, and September 24 + 25!

The package includes a stargazing talk led by local astronomer and president of the Mission Astronomy Group, David Brown aboard a pontoon boat, and a picnic snack from Heaton’s. A captain like Chris from Paddles by Sea navigates the boat so all you need to do is look up and learn.

For more about the moon and stars outing and to book, send an email to talktous@verobeachhotelandspa.com.

We enjoyed Stargazing on The Sea as guests of the Kimpton Vero Beach Hotel & Spa. All views and experiences are our own.

Next: The best spot for bioluminescent kayaking in Florida