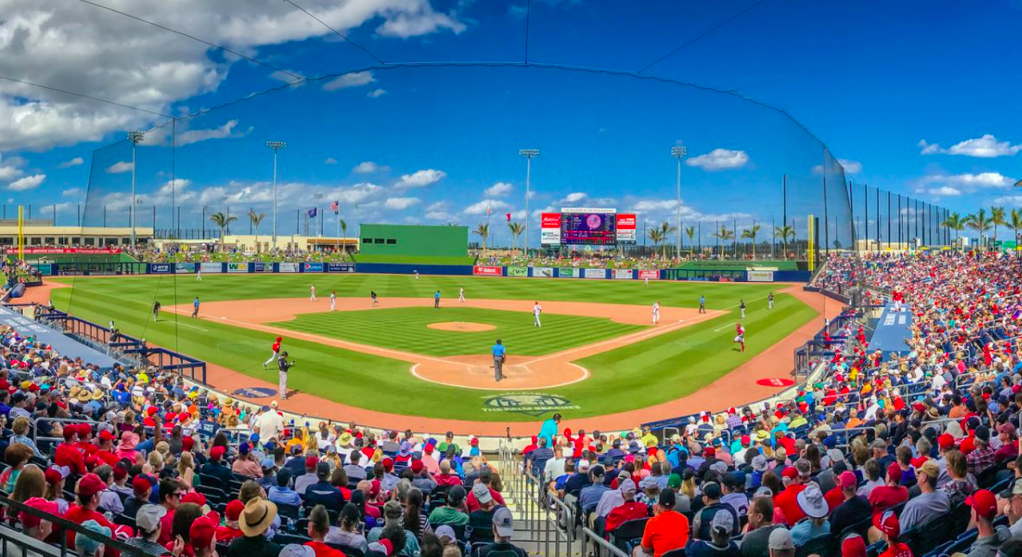 Spring Training in Florida is in full swing

It’s baseball fans’ favorite time of the year: Spring Training in Florida. Pitchers and catchers reported a few weeks ago, and their teammates followed suit. Now it’s the fans’ turn. Friendly (but, let’s be honest, not so friendly) games are being played throughout Florida as teams prepare for their seasons in their quests for the World Series.

Over the years, we’ve caught more than our fair share of Spring Training games all across Florida. For my husband, a lifelong baseball fan, it’s all about the game. He’s into the strategy, the stats and the finesse of the game. For me, there’s something to be said for the smaller, more intimate stadiums; sitting on a berm watching the players warm up; and the camaraderie of the fans – winter’s nearly over and the boys of summer are on their way home.

As I type this post, the weather couldn’t be any better to catch a Spring Training game in Florida – the sky’s as clear and blue as it can get, a breeze is blowing and the sun’s rays bring warmth to a cool-for-Florida 65-degree day.

If you’re a fan of the Detroit Tigers, New York Yankees, Philadelphia Phillies, or Toronto Bluejays, you’ll want to set your sights on Central Florida for your Spring Training fix.

Right off of I-4, which travels east-west from Tampa, through Orlando and to Florida’s East Coast, is Lakeland, where the Detroit Tigers play their Spring Training games at Joker Marchant Stadium. After you’ve cheered the Tigers on to a win, head over to the campus of Florida Southern College, which has an astounding number of Frank Lloyd Wright-designed buildings.

Heading west from Lakeland, the New York Yankees take the field at George M. Steinbrenner Field in Tampa. The stadium is centrally located in Tampa, making it easy to get to some of the city’s top spots before or after the game. Check out the food hall at Armature Works, soak up more sun along the Riverwalk, or do some shopping at newly-opened Midpoint Tampa.

From Tampa, cross the Courtney Campbell Causeway to Clearwater where the Philadelphia Phillies take on their opponents at BayCare Ballpark. Grab an authentic Philly Cheesesteak, watch the game from the Tiki Bar, and after the game ends, toast a win on Clearwater Beach as the sun sets.

For more than 40 years the Toronto Bluejays have played on their home turn in Dunedin, and this year are enjoying playing at the recently-renovated TD Ballpark. After the games are over, there’s plenty to do in Dunedin, and there will be even more to do – the Bluejays are opening their regular season in the coastal town.

The Pittsburgh Pirates take the field in Bradenton at LECON Park, the oldest of the Spring Training stadiums still hosting a team. The stadium was built in 1922 and started welcoming teams in 1923 – that’s some history! After the game, the beaches along the Gulf of Mexico await. What are you waiting for?!

Just south from Bradenton on I-95 is Sarasota and the spring home of the Baltimore Orioles, who play at Ed Smith Stadium. Just like LECON Park, Sarasota has a long history of Spring Training, too, dating back to the 1920s when the New York Giants played here, followed by the Boston Red Sox, Chicago White Sox and Cincinnati Reds. A hot spot in Sarasota to check out after the game is St. Armands Circle with shopping, dining and some relaxed night life.

South of Sarasota is Venice, where the Atlanta Braves hit the field at CoolToday Park. The new new, state of the art stadium is a terrific spot to take in a game, and just in case you forget who you’re to root for here, tributes to iconic Braves like Hank Aaron and Jackie Robinson greet fans at the entrance. Afterwards, head west to the beach and keep your eyes peeled: Venice is the “Shark Tooth Capital of the World.”

The Tampa Bay Rays travel about 75 miles south from Tropicana Field in downtown St. Pete to Port Charlotte for their Spring Training Games at Charlotte Sports Park. Fans who’d rather walk while watching the game are in luck here – a 360-degree boardwalk circles the stadium for terrific views from every vantage point. Continue your fun in the sun by taking on outdoor pursuits like fishing, kayaking, hiking, bicycling… pretty much anything you’d want to do!

Two teams head to Fort Myers for their Spring Training warmups – the Boston Red Sox and the Minnesota Twins. The Red Sox take on their opponents at Jet Blue Park, also called “Fenway South” because of its resemblance of the team’s Boston home, complete with a Green Monster. Churchill Downs meets baseball at the Twins’ spring home, Hammond Stadium. Whichever team you’re cheering on, you won’t want to miss shelling on nearby Sanibel Island, the beaches on which are filled with seashells.

Across the state in Southeast Florida is where fans of the Houston Astros, Miami Marlins, New York Mets, St. Louis Cardinals and Washington Nationals can watch their favorite players in action.

Starting in West Palm Beach, both the Houston Astros and Washington Nationals take the fields at the same stadium, but not at the same time: FITTEAM Ballpark of the Palm Beaches. The ballpark is just four years old, and a terrific experience for fans as well as both teams’ players. After the game there’s an embarrassment of riches as far as what to do next: beach, shopping, dining, museums, golf… the list goes on.

Traveling north on I-95, the next stop is Jupiter, where the Miami Marlins and St. Louis Cardinals spend their Spring Training. Just like the Red Sox and Twins, the Marlins and Cardinals share a balled at Roger Dean Chevrolet Stadium. Jupiter is where outdoor enthusiasts come to play; add on some time to your visit to explore the Jupiter Waterway Trail, about 40 miles of rivers, beaches and inlets.

Last on our tour of the Grapefruit League is Port St. Lucie, where the New York Mets have played for more than 30 years. Bring a picnic, grab a seat, or sit on the berm – every seat in Clover Park is the best seat in the house. After the game, set out for some exploration in the area – there’s wildlife, Atlantic Ocean beaches, horseback riding, SCUBA diving and plenty more fun from which to choose.

Have you been to Florida for Spring Training? Which is your favorite park, and who do you root for?