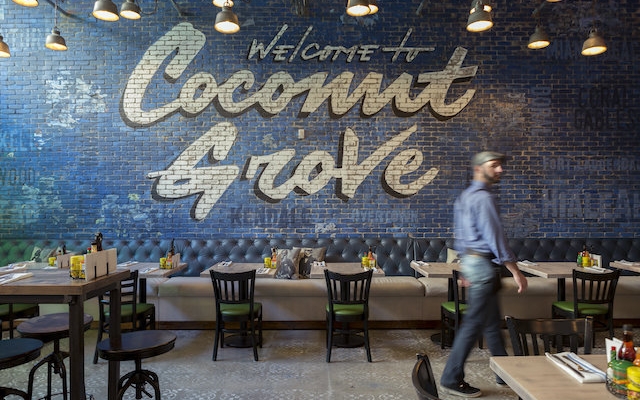 Things to do in Coconut Grove in Miami

Wondering about the things to do in Coconut Grove? You’re in the right spot. When planning a trip to Miami, it’s easy to be drawn to the buzz of South Beach, the sounds and flavors of Little Havana, and the hip vibes of Wynwood.

But during your next visit to the Magic City, why not travel about seven miles south of the Miami International Airport to the neighborhood Coconut Grove on Biscayne Bay.

What is Coconut Grove?

Considered Miami’s original neighborhood, The Grove was founded in 1873 by a mix of pioneers, artists, intellectuals and adventures; nearly 150 years later, it’s still an attractive destination. Not far from Miami’s gleaming skyline, Coconut Grove encompasses a little more than five and a half miles, most of which is residential. Within that area, “downtown” Coconut Grove is 18 very walkable, tree-lined blocks.

Here we take a look at how to explore this fun Miami neighborhood. Oh, and you can bring your dog along, too — The Grove rolls out the welcome mat for its four-legged friends.

What are some things to do in Coconut Grove?

Follow Main Highway — which is not a highway as we know it as it, but rather a two-lane road that runs though Coconut Grove, flanked by boutiques and cafés — to The Barnacle Historic State Park. Winding through the mature hammock of trees, follow the same route carved as a buggy trail leading to the home Ralph Munroe, one of Coconut Grove’s most influential pioneers, built in 1891.

Whimsically named The Barnacle because of its shape, the house is the oldest home in Miami-Dade County still standing on its original site on the bay. A guided tour of the home provides insight into life in South Florida in the late-19th century, as well as into the life of the man who is credited with broaching the topic of sea turtle conservation in 1898.

After the park, follow the Commodore Trail past The Grove’s three bayside parks and marinas en route to Vizcaya Museum & Gardens for more local history.

Built between 1914 and 1922 on Biscayne Bay, James Deering moved into his eighteenth-century Italian villa-inspired South Florida home on Christmas Day 1916. The lavish gardens to the south of the house were designed after those found in seventeenth- and eighteenth-century Italy and France, and are considered among the most elaborate in the U.S. to this day.

Leaving the early twentieth-century behind, return to the “downtown” area for a bit more wandering, peeking into fun and funky boutiques like Ramona LaRue by Arianne with hand-painted-inspired silk pieces by Arianne Brown; H & H Jewels for a special memento; and The Bazaar Project, part café, part boutique, all fun.

What are the best restaurants in Coconut Grove?

Dining out is a neighborhood pastime in these parts, and we know the best restaurants in Coconut Grove. For breakfast, join the friends and families gathered for café con leches and Cuban diner dishes at Chug’s, and savor every bite of Prawns Toast for brunch at Kush By Spillover.

The outdoor café setting of Le Pain Quotidien is as appealing as its menu filled with simple yet exquisitely-prepared French boulangerie fare. Tuck into one of the exquisite dishes for lunch, like the Tuna Niçoise Tartine, and plan your next course of action in exploring this delightful village.

Make reservations for dinner at Bellini Restaurant and Bar atop Mr. C Miami – Coconut Grove; ask for an table outside and take in the views of Biscayne Bay.

Where should I treat myself in Coconut Grove?

Inspired by owner Matt Kuscher’s childhood home and decked out in all things ‘80s, Vicky’s House Milkshake Bar is the perfect place to treat yourself to a decadent shake. Down the street, there may be a line out the door for a slice of pie at Fireman Derek’s Bake Shop. Or, skip the calories and indulge in a spa treatment at The Ritz-Carlton Coconut Grove, Miami.

What’s the best way to get around Coconut Grove?

Aside from walking, bike and scooter shares and the Coconut Grove Trolley are popular ways to explore the neighborhood. Or, download the app and request a ride from Freebee, an electric car that is free to ride from Point A to Point B within the neighborhood.

Mr. C Miami – Coconut Grove is a boutique hotel by the bay with an Italian yacht-themed décor and a rooftop pool to make a splash. The spacious rooms are very comfortable, and you have all of Coconut Grove at your doorstep; borrow one of the hotel’s bicycles to explore on two wheels.

Next: 4 unique things to do in Miami