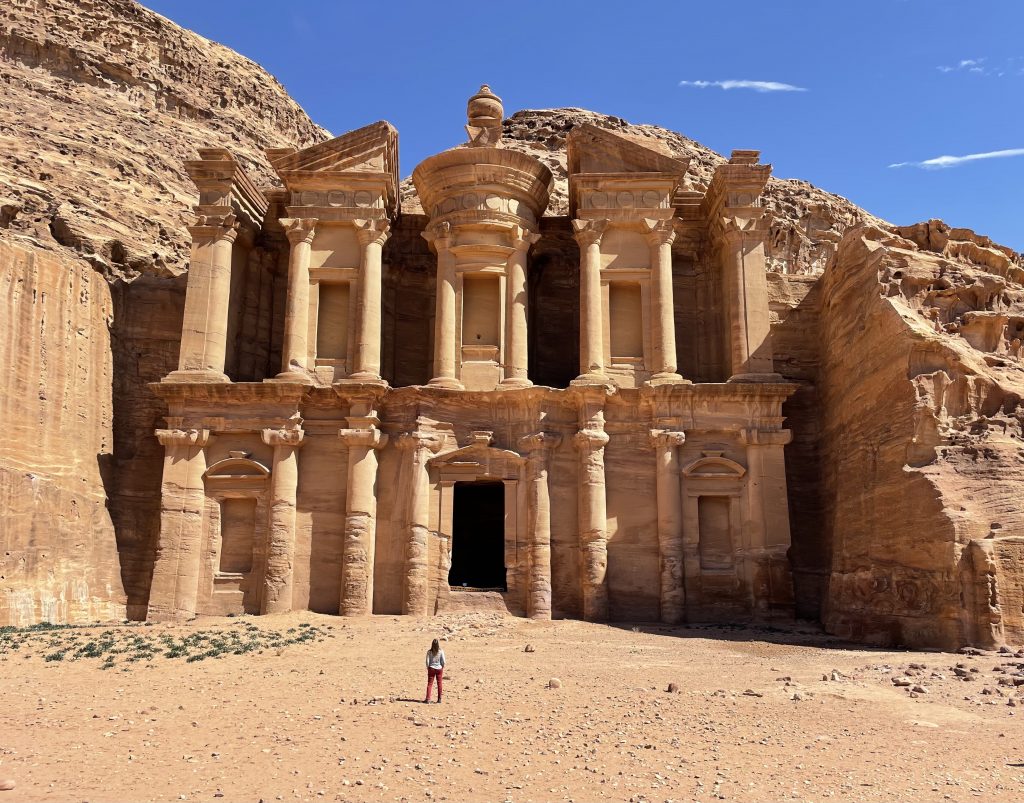 I returned from my trip to Jordan at the beginning of March, and truth be told it’s taken me nearly all of this time to truly digest the experience. From Wadi Rum jeep tours to visiting ancient historic sites, I saw and did a lot of awe-inspiring things (and if you know me, you know I do not use the word awesome regularly) in this fascinating country. I’ve been fortunate to travel to far-flung places throughout my journalism career — places like Australia, Japan, French Polynesia, Europe and Central America — but I never thought that I’d have the opportunity to travel to the Middle East.

When Globus invited me to join their Jordan Escape, a seven-day tour from Amman to the Dead Sea, I didn’t hesitate for a moment. I don’t know much about the Middle East, and was eager to explore a new-to-me part of the world. What’s more, the trip is part of the travel company’s Escapes by Globus collection that’s designed to showcase destinations off-season, when there are fewer crowds, lower prices and milder temperatures.

Over the course of my week in Jordan I saw so much and met so many warm and welcoming people. Here, I share with you six of the highlights of my awe-inspiring Jordan Escape.

The first highlight of my Jordan Escape was all of the warm and welcoming Jordanian people we met over the course of the week, starting with Osama, a native Jordanian and Globus guide for the weeklong trip. Each morning Osama greeted our group with his dazzling smile and impeccable English, outlining our day in front of us and answering any questions that may have popped up. (If you read the previous post about the unexpected things I learned in Jordan, you’ll know that Osama and all Jordanian tour guides go through a rigorous curriculum to be licensed through the government.)

And then there is Maya, a blind college student we met in Amman at Abaq Laon, a program through which she and other blind students learn to paint by what’s called the scent of color. Maya’s personality shown through her infectious smile, her curiosity bubbling through her hurried questions — asked in perfect English that she says she learned on YouTube — about us and our lives here in the United States; she then gifted us with a song. Maya’s definitely going to be big, and I highly recommend following her TikTok account.

Amman is where I also met Maria, a native Jordanian who teaches her grandmother’s recipes through cooking classes at Beit Sitti. We all had a hand in making our dinner as Maria shared stories about growing up in Jordan, about her family, and about her own life. At the end of the class, we all sat down to enjoy a delicious meal together of curried lentil soup, mutabbal beitinjan, fattoush and much, much more.

In Petra, we dined with Amena in her home, along with her brother Sohaeb, and her three daughters and son. Their graciousness and kindness in welcoming us and preparing a feast of local, customary dishes was heartfelt. We spent hours together, sharing a meal and stories about life in Jordan and the United States. At the end of the evening, we hugged each other goodbye (the women, that is, honoring local traditions to not make physical contact with the men), truly feeling we had made lifelong friends.

These are just a handful of the people I met during my time in Jordan, though there were countless others with whom I exchanged smiles, waves and nods, like the Bedouin family who lives in the middle of the desert and the women at the local co-ops. Though we don’t speak the same language, we could communicate in the universal language: a smile.

My first glimpse of the astonishingly ancient sites in Jordan was at Jabal al-Qal’a, or the Amman Citadel that sits high above the city. It’s on these grounds that the Temple of Hercules once stood, and looking at the partial reconstruction that remains I can only imagine how large and imposing it must have been.

The Jordan Archaeological Museum is also found on Citadel Hill, and though it’s simple, the artifacts found within are anything but. I’m talking some of the Dead Sea Scrolls, artifacts from the Bronze Age and the Stone Age, and — this totally blew me away — the Ain Ghazal Statues that date back 8,000 years.

As impressed as I was by Jabal al-Qal’a, I wasn’t ready for Jerash. Greeted by Hadrian’s Arch, which was built in 126 AD, the entirety of the incredibly well-preserved Greco, Roman, Neolithic, Byzantine and Omayyad remains. It’s evident by all of the sites within the walled city that Jerash was the place to be in its heyday, complete with a hippodrome for chariot races and army drills. Walking along the cobbled streets that had been traveled for centuries, and indeed even millennia, I was transfixed. There is no way that my camera could capture the sheer magnitude of Jerash, so I did my best to capture it in my mind’s eye to retain forever.

Petra is another Jordanian sight that completely blew my mind. Rather than entering the UNESCO heritage site through the main entrance, our group went on a guided hike through “the back door,” aka the desert. After a few hours traipsing across the unforgiving landscape, our group rounded a bend and let out a collective gasp — we had our first glimpse of The Monastery and Petra’s magnificence. I truly had no idea of the sheer magnitude of the once-thriving city, and when I could regain my thoughts tried — to no avail — to understand how these breathtaking sites could have been built and carved back in 400 BC.

Because the Monastery is at the back of Petra, and it takes a lot of steps and stairs to get there and back to the front, it’s a less-visited part of the site, but well worth the time and effort to get there. I stopped at the cafe for a drink and a quick snack and just sat there staring, rendered speechless by the mystery.

We spent the rest of the day making our way through Petra, to the front where the most famous site is found — the Treasury. Even with more people milling about than we saw at the Monastery, it still wasn’t overwhelming and there were plenty of opportunities for us to sit and stare in awe.

That night, I returned to Petra By Night. After the sun sets, and on a few nights a week, luminaries line the walkway to the Treasury, which is lit by 1,500 candles and colored lights. For about an hour I joined hundreds of others sitting and watching and listening to live music, stars twinkling overhead and joining in the show. It truly was a magical night, and one that I highly suggest should you have the opportunity.

Having lived in Florida for more than 20 years now, the stark contrast of Jordan’s deep red desert against the bright blue sky above was staggering, and beautiful. There’s no greenery around, just an otherworldly red landscape as far as the eye can see.

My Jordan Escape took me to Wadi Rum, which I knew for being the setting for some of the Star Wars movies. Once we arrived, our group hopped onto benches in the back of pickup trucks for Wadi Rum jeep tours: our guides drove us miles out into the desert without a hint of civilization to be seen anywhere.

All around us rock formations soared towards the sky, carved by waters that ran through the desert millennia ago. Petroglyphs still remain on some of the rock walls, sharing stories of people who had passed over these same sands centuries ago.

If there’s ever any doubt about just how hearty the human race is, I point to the Bedouin people who have made the Jordanian deserts home for generations. Eeeking out a life in the harsh desert climate isn’t for the faint of heart, yet the Bedouins do it seemingly without effort and with grace. During our Wadi Rum jeep tours we joined some of the nomads for tea in a Bedouin tent, learning more about their way of life in the desert.

Like with most travel, food is a big part of the experience in Jordan, as you can likely surmise from what you’ve already read. As a pescatarian, I was a bit apprehensive if I’d find enough to sustain me in Jordan, but my worries were for naught. Rather, I found plenty of plant-based options that kept me filled and fueled for the days’ activities.

Some of my favorite dishes in Jordan were mutabbal beitinjan, an eggplant dish similar yet different from babaganoush; muhamara, a red bell pepper dish with a similar consistency to hummus; salads; and, of course, hummus.

When we dined with Amena and her family, she knew that I didn’t eat meat and so they prepared me my own feast with some of the dishes mentioned above, as well as a delicious spinach dish that I ate over rice. Incredible!

I was so taken with the food in Jordan that I’ve made a few of these dishes (thanks to the recipes from Beit Sitti) a couple of times when we’ve had family and friends over to our home.

One of the highlights of my Jordan Escape was definitely on the last day when our group visited Bethany Beyond the Jordan, the baptism site of Jesus. We were fortunate to have the privilege of joining Director General Engineer Rustom Mkhjian, who oversees the religious site, for a tour.

Over the hour we were together, Mr. Mkhjian shared his passion and the history of the site, including sharing that different religious groups like Muslim and Judaism, in addition to Christianity, watched over and protected the site for millennia. As a result of wars, the baptismal site was essentially lost, and then full of land mines. After the 1994 Peace Treaty was signed, de-mining of the area began and archaeologists started looking for the baptismal site. It reopened to the public in 2002.

As we walked the sacred grounds, Mr. Mkhjian showed us the cave in which John the Baptist lived when Jesus came to him; the remains of the first churches built on the site; and the exact place in the river where John baptized Jesus. Though the river has changed course since, water still flows and I saw the remains of the pillars that once held churches over this sacred place. Before we left, Mr. Mkhjian kindly invited us to go down the steps to the river so that we could touch the water that still flows where Jesus was baptized.

Afterwards, Mr. Mkhjian took us to where the Jordan River flows today, now serving as a border between Jordan and Israel, a stone’s throw away.

“Build bridges of love and peace,” Mr. Mkhjian offered several times during our time together.

Next: What to expect in unexpected Jordan.