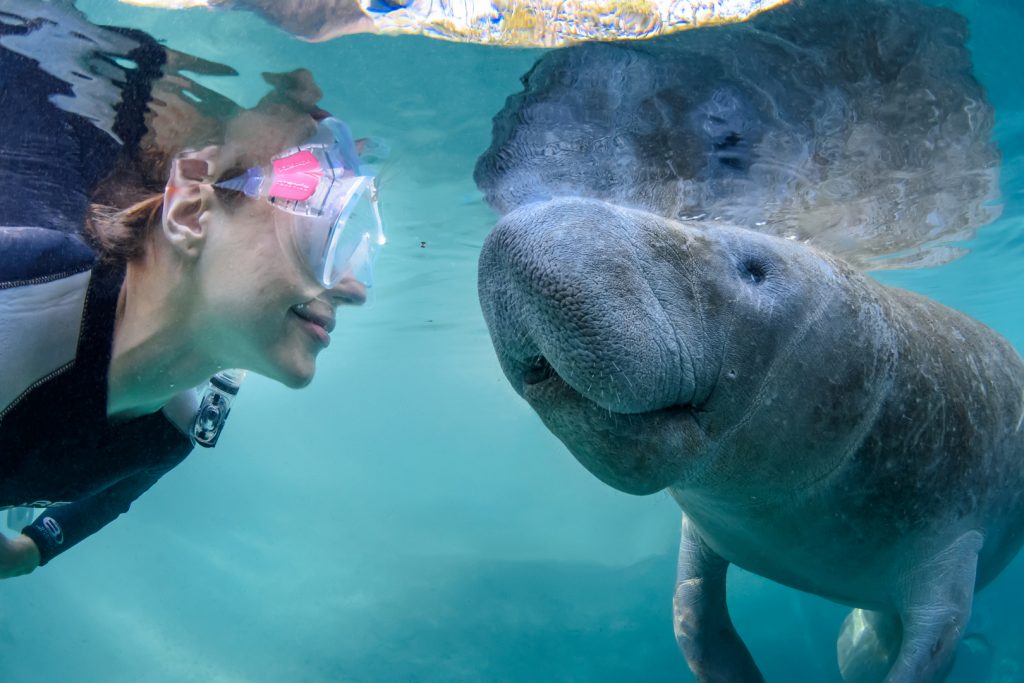 When the air gets a bite to it in Florida and water temperatures in the Atlantic Ocean and Gulf of Mexico dip below 70 degrees, it means more than just time to bust out our flannels and booties to get in the “winter” spirit—this time of year here is all about our manatees.

And one backroads place in Citrus County, north of Tampa, is one of the only places in the world where you can legally—and reliably—enter the water to snorkel with manatees.

While it’s possible to kayak and snorkel among manatees throughout much of the year in Florida, on a cold winter’s day in the Crystal River area you can pretty much guarantee the chance to be surrounded by them while floating in the water as a passive observer.

“Manatees don’t have calendars, they have thermometers,” Cody Cummins, the store manager at dive center and tour operator Bird’s Underwater, told me recently as I headed out to snorkel with the animals.

When it gets cold, they make for the relative warmth of the state’s many springs that pump out water at a constant 72 degrees year round. Thousands of people visit Crystal River in Citrus County each year to see the animals up close and swim with them during organized boat tours in one of the only places in the world where it’s possible.

For the ultimate socially distanced manatee experience, you can consider heading out in your own rented kayak for a more independent exploration of the area as I did.

It’s easy to rent a kayak and snorkel gear from Bird’s Underwater and navigate on your own out into Kings Bay and the springs for a low-to-the-water look at the manatees where they dwell.

Before getting into the water with the manatees, maximize your comfort level but making sure your wetsuit and snorkel mask fit perfectly (fins can disturb the manatees, so they’re not allowed—you won’t miss them, anyway, as the real fun is just laying afloat in a big puddle of manatee love). Not only will your wetsuit keep you warm in the chilly water, its buoyancy helps keep you afloat on the surface without requiring much movement to stay in place. It’s a privilege to be in the water with these animals, and the goal is always to be an observant but totally passive bystander in the manatees’ environment, causing as little disturbance as possible.

If you’re kayaking out into King’s Bay from the shop, count on about 25 minutes to reach Three Sisters Springs, where the manatees gather. Pontoon boats make the cruise in far less time, of course. Either way, the joy is in the journey—and you’re likely to spot manatees along the way. The spring head, with water as clear as it gets, is the best place to swim with them, and also where you’ll see the most manatees since the water is warmest closest to where it bubbles up from underground. On cold winter days in Florida, you’ll see steam rising from the springs, making it seem like you’re about to enter a hot tub. It’s not that warm, of course, but it’s warmer than the air. So despite the nip on the breeze, brace yourself and slide gently into the water and into their world.

On my recent trip to swim with the manatees, I’d been underway for less than five minutes out in the bay when I spotted the telltale boiling mark on the water’s surface that indicates a manatee below. I stopped paddling immediately and let my kayak drift like a leaf in a stream. Then I heard a whoosh of air—a manatee exhalation is a sound you cannot forget, it’s like the breath of life itself. Two black nostrils materialized on the water’s surface. Encounters like this are hardly are in Florida, where manatees are frequent backyard visitors, but it never fails to set my heart racing with wonder.

I watched the animal’s curved back, as matte gray as river stone, break the surface and float there within feet of me.

Into the manatee’s realm

It’s an easy paddle along the shore of Kings Bay, past a pier and under a low bridge to the spring head at Three Sisters.

Old school Florida homes and a few requisite mansions line the narrow canal, and it’s pretty incredible to think that such ancient and vulnerable animals can still thrive in such close proximity to humans. Many of them have scars on their backs from boat propellers, however, a constant reminder of the harm we do and to always proceed with care as we navigate through their world.

When large numbers of manatees are crowding the spring head, it might be temporarily closed off with buoys. But that just promises a manatee-overload experience for snorkelers. Those manatees that don’t have calendars also don’t have borders. And as I entered the water in the river, just outside the spring itself, there were several around me already, rolling on their sides and peering up at the world from tiny eyes that get lost in all their folds.

Mothers and babies are commonly sighted. And as I entered the water, I spotted a pair just resting there in the water column, hovering a few feet under me with that neutral buoyancy the manatees have mastered. Several other manatees glided past, and one even came in close to me for a nuzzle on my elbow. Humans aren’t allowed to approach the manatees for contact, but if the animals initiate it you are welcome to be the lucky recipient. And it’s an encounter like no other.

These are the backyard wildlife experiences we live for in Florida. And one you shouldn’t miss on your next winter trip to the Sunshine State.